Will Conor McGregor be next in line to match up against Floyd Mayweather? 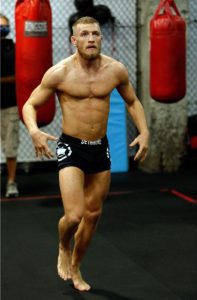 One of the best boxers of our time Floyd Mayweather, Jr. is considering the match up with Conor McGregor.
This is could be a good pay day for Mayweather as he could bring home $100,000,000 and most likely would not be a difficult match up in the boxing arena.
McGregor said: “It was him that leaked the rumor. He get’s $100 million, and I get $7 million? That is a pay cut to me. I don’t take pay cuts. I thought boxing was where the money was at. Seven million is absolutely laughable. He’s taking $100 million. I’m also taking a $100 million. I’m 27 years of age and I’m just about half way through a $100 million contract.”
“At 27 years of age, Floyd Mayweather was on Oscar de la Hoya’s undercard. Compare that. Who doesn’t want to conquer both worlds? He’s getting old now. I have the size the reach, I have the height. I have the youth. He needs me, I don’t need him. That’s the truth of it. Who else can he fight? If he fights someone else in the boxing realm, all of a sudden the pay goes from $100 million to $15 million. He needs me. If he wants to talk, we can talk, but it is me who is in control here.”
“I don’t really care about rules. He can make all the rules he wants. I know he will not want to fight in a mixed martial arts contest in a true fight. If he wants to fight in a limited fight, that’s no problem we can do that. I will set aside the many forms of fighting that I practice in and I will focus on one particular craft.”

There have been many ideas of bringing top boxers and mma fighters together to see who would come out on top. This matchup is one that could become a reality.
Most likely McGregor would lose, but it could be a huge pay day for him, it would be a fight that would make him more well-known and famous possibly it could open the door to many future opportunities. McGregor can set the loss aside if it puts a $100 million in pocket.
Dana White president of the UFC has expressed skepticism about this fight, but has said that if Floyd Mayweather is serious and genuinely wants to fight then “Floyd, call me.”