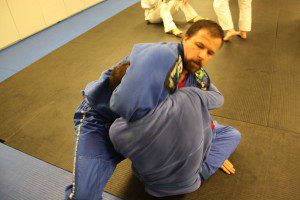 BJJ hip mobility. Nearly every technique in Brazilian Jiu-Jitsu requires efficient hip mobility. Generally speaking, this refers to the ability of the hip joint.  To move through its entire range of motion without pain or discomfort. Perhaps the most obvious technique requiring good hip mobility is the hip escape. The hip escape is a fundamental grappling movement that forms the foundation of a number of BJJ techniques. The hip escape, however, is only one example. Your ability to effectively shrimp, play open guard, perform sweeps and escapes, and even execute certain submissions all require free and unrestricted hip movement. In other words, most BJJ techniques start and end with the hips. Given the importance of hip mobility in BJJ, all students should dedicate a portion of their training to the development of this area.

Proper hip movement is at the core of most properly-executed BJJ techniques. Therefore, you should learn to approach this topic from a conceptual standpoint. Try to determine the overall role it plays in your game. An easy way to do put this is to focus on your hips during your next training session. I realize that this may seem a bit strange at first, but focusing on this vital component of your grappling game can result in rapid improvement.

For example, when you attain full mount on your opponent, how do you normally advance towards his head? Do you inch forward with your knees, allowing your hips to trail behind? If so, try this instead: use the power of your hips to move up your opponent’s body. By thrusting forward with your hips, you’ll find that it becomes much more difficult for your partner to resist your progress.

Let’s take this a step further and assume that, having attained full mount, you’d now like to attempt an armbar. Typically, your partner’s elbows will be tucked against his sides to prevent submissions. As you probably know, it can be very difficult to pry an opponent’s arms free using the strength of your arms alone. 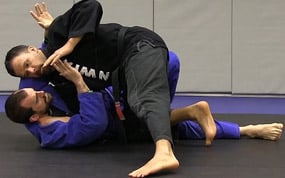 However, the incorporation of your hips can make this a relatively easy task. If you can place your knees even partially beneath his elbows, you’ll then be able to harness the power of your hips. This will allow you to dislodge his arms from his sides, enabling you to set up and execute the armbar. The movement in both of the above examples is the same-a thrusting motion of the hips.

While these are only two examples, note that this relatively minor adjustment. This one minor adjustment will vastly increase the efficiency of both techniques.
Can you think of other scenarios in which focusing on hip movement could potentially make your techniques more effective? Play around with this concept during your next training session, and you’ll be surprised at the ease in which you perform previously challenging techniques.