From Kick with Right Heel – Sink the weight to draw in your right leg while turning the hips to the front. The arms close in from their open position by dropping the elbows. The palms turn in to face you at shoulder height, as though you were holding a book. 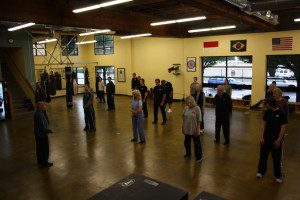 Continue to sink your elbows as your right heel lowers to touch the ground in a bow stance position. This draws the hands down past each hip.

As the weight shifts forward into the stance the hands circle up a forward to temple height. They form light fists as the rise with the palms partially turned out so that you would strike with the first knuckle of each hand.

Move the weight into the rear foot and begin turning to your left. The arms circle out and down with this waist shift. The right toe pivots in until you are “pigeon toed” The hands open over the course of this movement very slowly; think of a blossoming flower. Proceed to the Kick with Left Heel Yang Style tai chi movement. (Mirror the instructions for the right side)

Break a collar grab from the top by circling the arms over and dropping your elbows into the opponent’s forearms. Step in and stick to the opponent’s arms to control them. Rolling your arms around their’s shift the weight forward and strike both temples.

This information is meant for reference and to give an idea of the details involved in all Yang Style tai chi movements. In order to receive the benefits of an internal arts practice it is vital that you seek qualified instruction.

If you are outside of Portland and would like information about our seminars or becoming an instructor please visit this page: Martial Arts Seminars & Instructorships