From Kick with Left Heel – The waist begins to turn to your right rear corner. Lower the left leg and touch the toe down in a cat stance. As the leg lowers the left hand pushes across the front of the body to the right shoulder.

The right arm rises above the shoulder until almost straight up from the body. The fingers of the right hand curl to the thumb as in the single whip position. As the arm complete their movement and the hips finish turning the heel of the right foot turns in until the toe is pointed at your right rear corner. (This is the transitional Yang Style tai chi movement: T-stance Position with Single Whip Hand Postion)

Sink into the right leg lower the torso until the leg is fully bent, or as low as is comfortably possible. The left leg slides straight back as the body lowers.

Turn the waist the face the opposite direction. As you turn the left hand swings down over the front of the body past the hip and up in the same line as the left leg (Skim the ground if your leg is fully bent). The edge of the left hand is facing forward. In sync with the rest of the movements the right hand circles in and down across the body coming to a rest at the right hip. The hand is still in the hook position with the fingers pointing up. 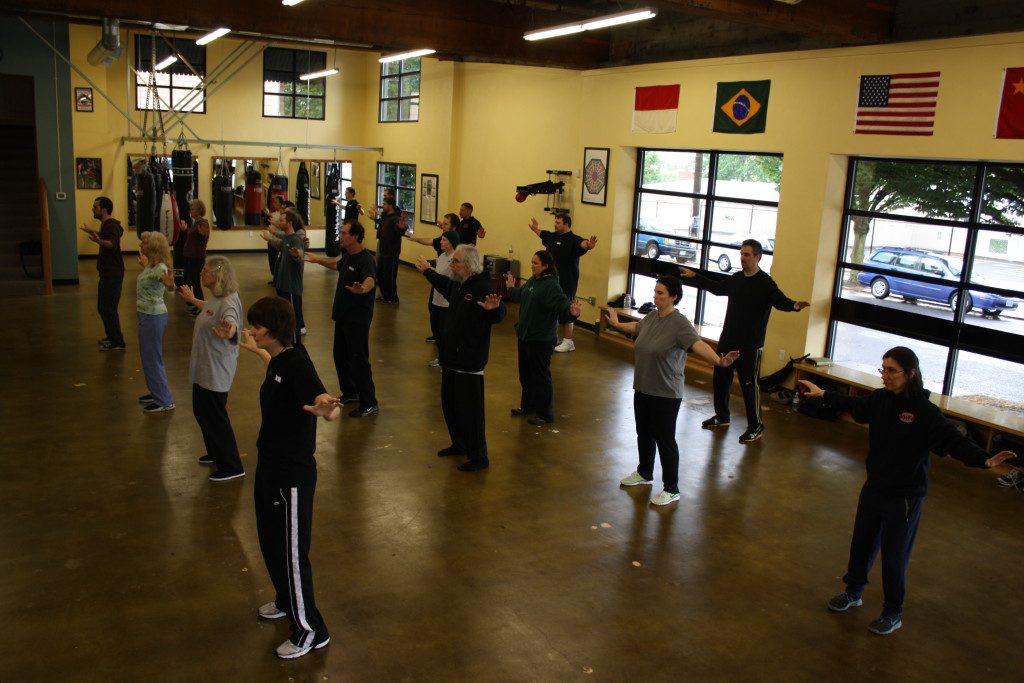 Dragon Waves It’s Tail – Meditate on the qualities of heat, energy, endurance, know the four directions and their relations.

Parry a strike to the outside with the right hand. Hook the wrist and draw to opponent’s force up. As you sink, sweep the opponent’s leg with your left foot.

This information is meant for reference and to give an idea of the details involved in all Yang Style tai chi movements. In order to receive the benefits of an internal arts practice it is vital that you seek qualified instruction.

If you are outside of Portland and would like information about our seminars or becoming an instructor please visit this page: Martial Arts Seminars & Instructorships