Women’s Self Defense: Gi or no Gi?

Should Women Train in Gi or No Gi For Learning Self Defense?

If you’re a woman who is new to Jiu-Jitsu, you’re probably wondering what the best way to learn would be. More specifically, you can either train with the gi or without one. Both offer their unique set of advantages and disadvantages, and we’ll talk about them now.

No Gi Training is Better For Competition 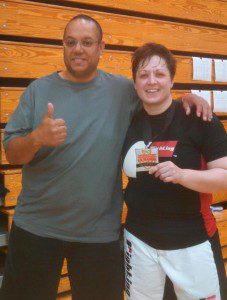 If you think that you’re going to be entering many competitions in your BJJ career then it is probably better to sign up at a school that offers mostly no gi training. We say “mostly” because it’s important that you learn some of the other too. No gi training is also better suited for natural athletes. It isn’t as strategic as gi formats and will expend far more energy as well.

No gi matches are generally very fast paced, and you’ll often end up “scrambling” for a dominant position on more than one occasion. Other people like no gi training because they think that it’s more comfortable than having to wear a gi while training – which is true. Wearing a gi during practice does cause you to overheat much more quickly, and they can be a little uncomfortable for some people as well.

Gi Training is Strategic and Fun!

Generally speaking, whenever a submission is locked on in no gi Jiu-Jitsu it is very difficult to escape. Escaping a submission with no training is very common since there isn’t that much material between you and the opponent. Hence, the sweat accumulated during the match will create a lot friction while trying to perform moves.

Overall, both forms of Jiu-Jitsu are a lot of fun. If you’re going to make the most of your BJJ career, we highly recommend that you take both – one for dominating in competition and one so that you can learn how to effective self defense for yourself against bigger and stronger opponents while on the streets by yourself.