Tate 100% Certain She Can Beat Ronda Rousey this time 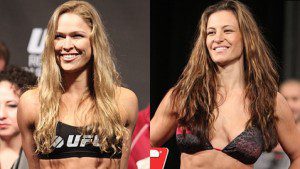 During an appearance on CBS Sport Radio Miesha Tate discussed her upcoming battle with Ronda Rousey. Tate questioned whether Rousey would ever come back the same and implied that her spirit had been broken by the loss to Holm.  “Whenever I’ve been down and out, my motivation was to come back and be better, stronger…” “I haven’t heard her say that one time.” Further, in Tates opinion Ronda has become distracted by making movies and a relationship with Travis Browne. She believes that Rousey wants to settle down and have a family.

Ronda herself has mentioned being near the end of her fighting career. Even back in early 2014 she talked about potentially retiring due to the many opportunities coming her way. On countless occasions she has detailed the long list of injures the a life of competing has left her with.

Ronda Rousey is the most dominant woman in MMA to date

All that said and despite Miesha Tate’s tough talk, who will win is still hard to tell.

No matter how tough you are going up against someone who has broken your elbow and twisted it the wrong way is extremely difficult. Controlling your mental state is important for any fighter and is particularly difficult if you’ve already lost to them.

So what’s your opinion folks? Will it be Tate or Rousey in their next match up?

To learn more about MMA training in Portland, Oregon check out our MMA page.  Regardless of whether you think the fight will go to Ronda Rousey or Miesha Tate, if this is exciting to you maybe it’s time for you to get out on the mat yourself.