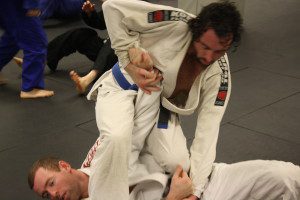 Do you want to be a Jiu Jitsu fighter? If so you are chasing a noble goal and you can attain great success. The first step would be to define what exactly a fighter of Jiu Jitsu actually would be.

A Jiu Jitsu fighter is a practitioner of Brazilian Jiu Jitsu who moves out of the club and competes either in Gi or No Gi grappling events, MMA, or combinations of the three. To compete in such an event are given a higher level of respect because they reflect a commitment to performing and putting their skills and reputation on the line.

One thing you do need to understand about being a Jiu Jitsu fighter, you do not have to be a stellar athlete or even someone who wins all the time. The mere fact that the person is willing to compete and put in the required effort to train for events and step on the mat is someone who is fighting. And this would be true even on the white belt level. And you do not even need to compete in many matches. Even doing one or two events a year is acceptable.

Another item to mention here is that those wishing to learn the art of BJJ will find taking part in tournaments and other such events prove to be a great extension of the classroom. To say you will learn a lot training for and competing in an event would be the understatement of a significant degree.

Developing the skills of a top Jiu Jitsu fighter is not easy but those willing to put the time and effort into the process will find it well worth the effort. Once you develop such skills, you can then move onto you the next great phase which would be becoming a talented trainer, teacher, and coach.