Is Muay Thai Good For Self Defense?

Being able to defend yourself on the streets is an important skill to have, especially if you reside in or around a “rough” neighborhood. With that being said, is Muay Thai good for self defense? While the sport wasn’t originally optimized for that, understanding Muay Thai and all the skillsets that it encompasses (kicks, punches, clinch fighting, etc.), it can definitely help you get out of a dangerous situation if need be. 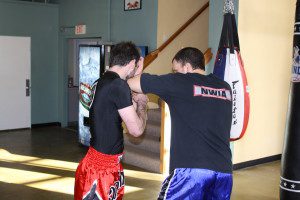 Is Muay Thai Good For Self Defense

Going From the Ring to the Streets

If you’re currently training, or are intending to train at a Muay Thai gym, you might be wondering about how to effectively transition from the ring to the streets. One thing to consider is this: most fights eventually lead to a clinch position, in which both people are hugged tightly to one another. In this case, knowing how to effectively fight from the clinch can serve you quite well! From the clinch, a good Muay Thai fighter can deliver powerful knee strikes and elbow strikes, both of which can knock an opponent out if delivered in the right location near the facial area.

Can Muay Thai Work Against Multiple Opponents on the Streets?

There aren’t many forms of martial arts that are designed to work effectively against multiple opponents, but Muay Thai is one of them. However, this isn’t to say that should the situation ever present itself that you couldn’t use what you know to escape or avoid injury. When fighting against multiple opponents, there are a few things to keep in mind. First, keep everyone in your field of view.

Don’t allow them to circle behind your blind side. Second, stay on the offensive, but continue moving towards a safe direction. Basically, throw punches and kicks as they progress closer, but always be looking for your exit. If an opponent makes their way past your outermost level of defense (jabs and straight kicks), resort to using more powerful blows in the form of elbow or knee strikes.

Knowing how to defend yourself in public is an essential skill to have. Is Muay Thai good for self defense? It’s just as good as any other marital art. Just make sure that you’re doing what you know and that you’re staying in control of the situation. If you feel outnumbered or threatened in a real-life scenario, always look for an exit rather than try and use your skills to fight.