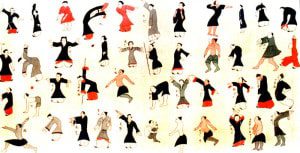 This is best explained by saying that a Tai Chi form is a specific movement and that Tai Chi styles are a group of specific movements. In essence it is the forms that make the individual style and that each style as Yang or Chen may have both unique forms as well as many that are the same or at least similar. You will also find that each different style is likely to have its own number of forms based on the teachings of the original master and any modifications that have been made to it.

Each Tai Chi form taught in Portland Oregon is broken even further down into postures or steps. A form can consist of as few as four postures or as many as 108 postures that can take as long as 20 minutes to perform properly from beginning to end. As you can imagine, the more postures there are to a particular form, the more complex it is and the longer it will take you to learn.

To add more to the complexity of learning, each posture also has its own number of moves which will also affect the time it will take you to learn the complete form. Each movement in Tai Chi Chuan is intended to be an exercise in several things at the same time. These are balance, co-ordination, regulating your breathing and perhaps the hardest lesson of all, physical control. You may find that it can be very helpful to practice an individual move so that you can see how it feels.

While there are indeed many similarities between the various forms in Tai Chi, the way many of them look and how fast or slow they are performed will depend on the style being taught and the frame that is chosen by the person performing the movement. As an example of this, the form “wave hands in clouds” as taught in Chen, Sun and Yang styles of Tai Chi Chuan, is similar, but you will find that in each style the hands are in slightly different positions.

As you look for Tai Chi classes you need to keep in mind exactly what benefits you hope to receive from learning the different forms. Today you will find that there are classes that teach modified styles and forms with specific goals in mind, such as helping those with arthritis, achieving weight loss and increasingly helping seniors to regain their mobility and lost sense of balance. Of course for those who wish it, there are also courses in competitive Tai Chi including weapons forms.