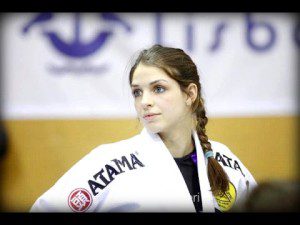 In a sport that is largely dominated by men, there are women who have reached the metaphoric summit in Jiu-Jitsu and become very famous as a result. It wasn’t until fairly recently that there’s been an upsurge in women participating in Self-Defense Jiu-Jitsu. Let’s take a look at some of the more famous and notable women of Brazilian Jiu-Jitsu.

Anna Corderio is one of the more famous women in the BJJ circuit today. She currently teaches at the Gracie Academy in Barra Upland, and received her black belt in 2009. What makes her unique is that she isn’t afraid to train even against the toughest of male opponents.

Also a black belt in Jiu-Jitsu, McKenzie Dern is one of the most efficient female grapplers of her generation. She started participating in the sport at the young age of 14, and has won her respect by acquiring several prominent trophies in the BJJ world. She remains a respected and famous female BJJ artist.

Fabiana Borges is another famous female grappler who was born in Rio De Janerio, Brazil. It was around 24 years of age that she became one of the top BJJ grapplers in the world at her weight class. She’s a first-degree black belt who admitted that her success in BJJ was largely attributed to her move to the United States about four years ago.

This list would not be complete without the famous Kyra Gracie. She earned her black belt under Carlos Gracie, and was actually one of the first female members of the Gracie member to make a name for her skills. She started to gain worldwide fame in her early 20s when she started dominating female BJJ competitions. For example, she did very well in the Pan American Jiu-Jitsu Championships as well as the World Jiu-Jitsu Championships.

Compete With Men does it matter for Self-Defense Jiu-Jitsu?

Do these women compete against men in competition? No, they do not. However, this isn’t to say that they couldn’t beat most men out there. This is an issue that has become quite popular in the BJJ industry over the past several years. Most of the women on this list would have no problem competing with the best male grapplers in their respective weight classes. It just goes to show that BJJ isn’t a sport that revolves around what sex you are.