“So, I’d like to check in, ask how Peter is doing lately,” says Joseph, an eleven year-old martial artist from our Youth Power program. He leans against my desk, eyes looking concerned. 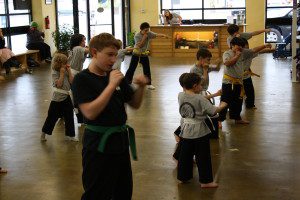 Peter is Joseph’s nine year–old brother. Leave it to an older brother to seek an impromptu progress report.

The other instructors and I behind the desk smile, obviously amused and impressed, and assure Joe that Peter is doing well, still working hard in his brother’s absence. A community of martial artists is a tight-knit one. We weren’t all born siblings, but we keep tabs on each other as if we were. We inspire each other, support each other, challenge each other. Almost every martial artist is in the studio environment by choice – we actively seek the type of community it offers.

To exemplify this, take the average pre-class gatherings that happen at our own youth martial arts programat Northwest Internal Arts. The kids break off into several permeable groups. The largest group is running around playing tag, getting to know each other and relaxing before class. A smaller group is lounging, talking school and home life. Another is collecting by the punching bags and mirrors in the corner. They are working curriculum with each other. Critiquing, offering advice, noting things they themselves can improve upon in comparison to their peers.

All this is done with little, if any adult intervention, instructor or not. A new student walks in, is introduced to teachers, and without being prompted, another youth wanders up and bravely introduces themselves. The new student is invited to play until class starts. This kind of group is one of initiation – after all, everyone remembers their own first day, and the comfort that came from being invited to join the group.

The effects of a youth martial arts community:

Studies show that a youth’s peer group heavily influences their development into adulthood. The friends and role models they surround themselves with play into forming social roles and ethical philosophies. Primary schools provide youths with a diverse array of social circles to fall into, with little guidance from teachers or older peers on how to consciously choose a group. Having a social network outside of school that is centered on a positive activity, such as music, art, or sports greatly improves a youth’s chances of making these choices wisely. Martial arts, as an environment carefully tended to be positive and respectful, introduces a child to a rare peer group that both supports and challenges its members, while offering them a way to critically consider prospective allies. 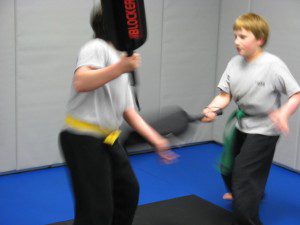 The youth martial arts community is one built upon set guidelines, codes of conduct and expectations of respect. This has a multi-tiered effect on both the martial arts practitioners and the martial arts themselves. In a broad sense, it secures the genuine survival of the art. In a more specific sense, it builds high expectations within each practitioner – of self, of others, and of environment. This means that even the young martial arts practitioner takes into account what influence they may have on others around them. They learn that they are as much a role model as the instructor leading the class; each martial artist is a vital part of the class structure.

Such structure in combination with strong, positive instructors builds an exceptional atmosphere for a child’s character development. Martial arts often offers a youth a haven from the pressure of mass media culture – exposing them to healthy alternatives in decision making, while surrounding them with a community that supports and encourages these good decisions.

I have been involved with martial arts since age nine. Every martial arts class I was involved with as a child was one that challenged me, inspired me, and kept me smiling even in life’s hardest times. Now, as a youth martial arts instructor, I know that this phenomenon came about not just by the hard work of my head instructor, but by the empathy, compassion, and drive of the students filling each class. The network of support these kids offer each other – not just between brothers like Joe and Peter, but between friends as well – is one that leaves me in awe at the end of each training session. They are as much a role model to me as I am to them; and no practitioner is without knowledge of their crucial role in our community.