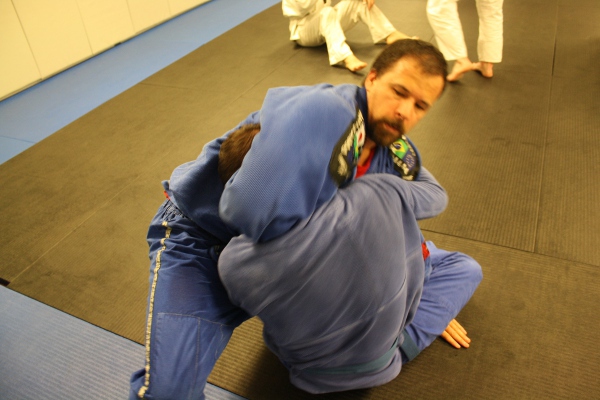 “Sir, you need to relax.  You are using a lot of muscle.”  I’ve heard this every week or two for the last nine years.  To my credit it’s better than it used to be.  I can flow… some 🙂  Still, yielding more, even in the face of intense pressure has become the heart of my jiu jitsu practice.  I am convinced that it is the difference between the advanced purple belt that I am and the Black Belt I will be.

Yielding is non-resistance.  If someone is attempting to drag your arm across your body then you move elsewhere.  Allow your opponent to do what they want.  They pin your hips, move your shoulder.  They pull your arm, you move your hips.  It’s not random movement.  When your opponent commits to a move there is always an opportunity move an uncontested point and end up with a better position.

The best point is not the contested one.  One of the hardest places I’ve found to yield is at the almost submission.  You are so close to the choke.  Their face is turning red and you hear the air whistling in and out of their constricted throat.  There is blood in the water and the last thing you want to do is let up on the pressure.  Still, you hear the voice “If you really had it, they’d already be tapping”  It’s hard to let go in these near submissions because sometimes strength works.  You’re strong and the discomfort isn’t worth it for them.  Then the tap comes and it’s natural to feel successful.  Avoid this dead-end by asking yourself “Do I want the cheap force-tap or do I want mastery?  I don’t get both”

It’s an issue of awareness.  Like I said I’ve been working on this same issue for nine years.  I understood the advice the first time I heard it, but I couldn’t seem to make it happen.  There’s always a deeper level of awareness.  The first level was just rolling enough to have experienced all the potential combinations and positions in jiu jitsu.  As a white belt we fight so hard (often because our fight-flight has been triggered).  We don’t want to be submitted and getting that tap means everything to us.  All this wasted time and energy.  We could progress much faster.  If you are a white belt reading this commit to rolling light for your first year.  Even if your opponent goes hard, all you care about is flow.  You’ll rapidly outpace the average jiu jitsu player and avoid bad habits you later have to shed.

For those of us who already know the positions of jiu jitsu and have a toolkit of techniques, it’s time to get to the real work.

Investing in loss.  Any time you find yourself straining, look elsewhere.  Your constant training mantra becomes “Where can I let them move, where can I move uncontested, where can I relax”  Be willing to tap a thousand times to junior belts and smaller opponents to commit to developing yielding skill.  Be happy to tap or lose position.  You are active but the movement is more like water.  Anywhere there is resistance you flow around. When pinned you focus on moving toward the empty space that their submission attempts create. “Roll like you are doing jiu jitsu with your child” Remember that your goal on the mat is to become more aware.  You want to notice the points where you resist, however subtly, and let them go.  There is always a better opportunity.

Active yielding.  If you have a hard time noticing where you are muscling you may need to just be a rag doll for a while.  Commit to moving only where it’s truly effortless.  Once you’ve really started to relax when rolling then can start being more intentional.  You are always on the attack.  The attack flows like water around the opponents movements and counters.  You are always moving to undermine their position, taking away space to tighten control and attacking any weakness the opponent exposes.  You attack, they counter, you flow with that counter into another attack.  This flow keeps going until they’ve left an arm too far out, the neck too exposed and the final submission locks on suddenly, without resistance.

Not giving up the fight.  Even without resistance the effort to win is constant until the end. Never give up if there is even the slightest opportunity to move.  Have high standards for yourself.  What matters most is how you win or lose any match.  To the best of your ability, roll like a black belt at all times. Take no pride in cheap wins or escapes that only worked because you were fighting a lesser opponent.

There is always another level of awareness.  The concept of yielding stretches out beyond your jiu jitsu.  Yielding, being able to give freely what the other wants while always moving to a good position for yourself.  It becomes a guiding principle for all interactions.

Another great example of yielding and flow: