The Yang 24 Form is also know as the Simplified Standard 24 Form. This is a relatively more recent iteration of the Yang family of Tai Chi. It was developed in 1956 at the behest of the National Sport commission. 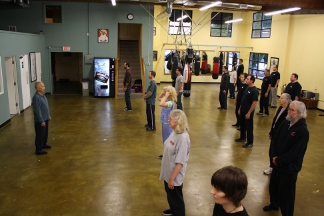 The form is the result of the efforts of several esteemed members of the Yang Cheng Fu line of the Yang Style Tai Chi lineage. The form was whittled down form the classic 108 form. Trimming away much of the repetition that exists in the 108 form while maintaining most of the postures. Most importantly the masters involved in the creation of this form maintained the fundamentals of Yang style Tai Chi therefore preserving the many benefits one can receive from this internal arts practice.

Typified by it’s clean, simple flow of movement this form is quite approachable and is ideal for beginning one’s tai chi practice. Generally practiced in a middle height stance the Yang 24 form is an excellent, non-impact form of physical cultivation. For those first starting their practice after an extended period of being sedentary the stances can be adjusted higher and shorter to make the practice accessible for everyone regardless of current health.

The practice gradually restores (and maintains) strength and flexibility allowing the practitioner of Yang style tai chi to increase intensity and continuously improve their physical development. For the healthy tai chi practitioner the stances of the Yang style 24 form can be expanded to deep, intense levels which result in incredible strength while maintaining grace.

If you live in the Portland, OR area and would like more information about training in Tai Chi you can contact us here.