These Yang Style tai chi movements should be a continuous flow.

From Step Back to Ward Off Monkey – Sink the weight into the right foot and turn the waist to the front. This movement draws the hands into a “hold the ball” position with the right hand on top and pulls the left toe into a cat stance.

Changing the angle of your form, step into a bow stance pointed twenty degrees to the left corner. 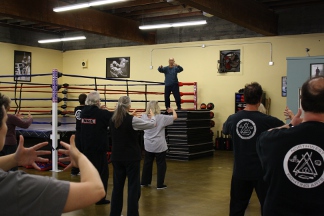 As you do so, roll the ball so the left palm faces the chest. The right palm faces forward then continues it’s movement down to the hip with the fingers turned out to the side. The intent is focused on sinking the weight and rooting into the stance.

Turn the waist slightly to the left while drawing the right hand up till the palm faces the left elbow. Shift the weight into the right foot as the Tan Tien rotates to the right. This pulls the hands down past the right hip. Let the momentum continue as you turn to the front again. The hands shift to a small “ball” position and circles up to chest height. Press forward as though the rear hand is driving the right.

The waist continues to turn slightly more to the left and the right hand crosses over the left wrist. Shift the weight back into the right foot, drawing both hands back and down to the height of your lower ribs. The fingers are lightly drawn back at this point. Now you push (as though pushing a barrel floating in water) while shifting the weight into a forward bow stance and slightly extend the arms (about 65%). Let the energy of the movement flow out into the hands carrying the fingers forward until the hands are in line with the forearms.

Ward Off… – Meditate on the qualities of humility, quiet and will.

If you are outside of Portland and would like information about our seminars becoming an instructor please visit this page: Martial Arts Seminars & Instructorships