What Does Brazilian Jiu-Jitsu Teach You? 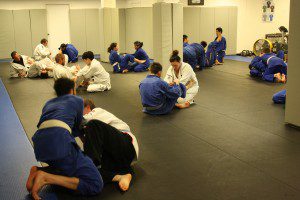 Brazilian jiu-jitsu is a special martial art in the sense that it can teach you things that come in handy both on and off the mat. What does Brazilian jiu-jitsu teach you? For one, it teaches you how to defend yourself against stronger and bigger opponents. Secondly, it teaches you how to become a more dedicated person, since you’ll need this dedication on the way to earning your black belt. Finally, it can teach you how to become a happier person, and “go with the flow” of life.

Defend Yourself against Bigger and Stronger Opponents with Brazilian Jiu-Jitsu

In 2004, legendary jiu-jitsu master Royce Gracie took on an opponent who weighed several hundred pounds more than him – and won! His opponent, Akebono, despite being much larger and stronger, wasn’t able to adequately fight back. Royce’s jiu-jitsu game was too dominant, and he was able to control the pace of the fight and achieve winning positions based on what he had practiced on the mat. Can the same type of success be achieved for anyone in any self-defense situation? In short, yes!

The reason why jiu-jitsu can be used against bigger and stronger opponents is because the techniques and moves involves are not determined by strength and speed. Instead, they are dictated by one’s ability to fully understand the position, as well as one’s ability to leverage their own weight while grappling. Some of the best jiu-jitsu grapplers in the world don’t weigh much more than 180 pounds, but are capable of beating opponents who weigh much more and who are much stronger simply because they’ve mastered the art.

Staying Dedicated on the Road to Becoming a Black Belt

The road to becoming a black belt can be a long one indeed. In fact, the average person will spend 10 years trying to earn one! For this reason, it’s important that you develop an internal “hunger” that will push you through the periods of no motivation or lack of energy. Once you earn your black belt in jiu-jitsu, this ability to dedicate yourself to something can easily transfer to other areas in life, making you a better overall person.

What does Brazilian jiu-jitsu teach you? Aside from helping you beat bigger opponents, and teaching you how to stay dedicated to things in life, it will teach you how to “roll with the punches” so to speak. Because in life, similar to jiu-jitsu, you can’t force certain things to happen – you have to take what life (your opponent) gives you to truly be successful.