Spine cranks are highly illegal in many competition matches, and should NEVER be attempted unless the goal is to severely injure, paralyze, or kill an enemy. Even under trained supervision, these locks are incredibly dangerous. Once again, DO NOT ATTEMPT AT HOME! 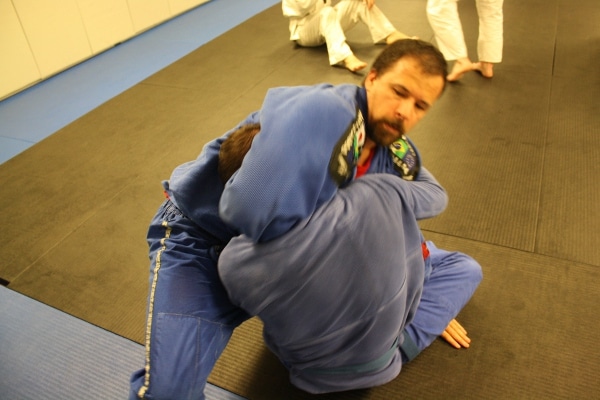 That being said, let us start to break down the two basic types of spine cranks. Most neck cranks are initiated from a mounted position, in which the attacker has a distinct advantage over the opponent, because their hips are pinned by the combatant’s weight. The basic, and probably safest (but still incredibly dangerous), neck crank is known technically as cervical hyper flexion, and colloquially as the crucifix. It is applied from one of two positions: the mount, or the side mount. The basic idea is to trap the opponents arms, and to force the opponents head towards their own chest. The stress this puts on the neck, top of the head, and cervical vertebrae often results in submission if correctly applied.

From mount: both opponents arms are controlled by the combatant, with the head resting in your armpit, and your arms interlocked behind their back. By raising up, you can force the opponent to dip their head further towards their chest, often resulting in submission. Be warned, as any sudden rotation may result in a broken neck and possible death.

From side mount: control one of an opponent’s arms with your legs, and the other with your own arms, creating a lock that allows you to leverage your hips by rolling in order to push an opponent’s head towards their chest, resulting in the same lock as mentioned above. While it’s harder to snap a neck through accidental rotation, it’s still incredibly dangerous, and once more, should never be attempted without supervision.

Spine cranks are referred to as such because they are often applied to the lower and middle back. However, because of the difficulty in applying them, they are rarely seen in competition. The trunk of the human body is amazingly strong, and it requires immense amounts of leverage that you typically don’t get during a fight, and as such is outside the purview of this blog. Even if you were to get a proper lock going, typically from a rear mount position, it would be dangerous and irresponsible to perform a crank that would result in a lock, as the forces applied could also break the spine.