Tai Chi Chuan is sometimes referred to as “Thirteen postures” or “Thirteen patterns”, these patterns include “Eight Jin Patterns,” also called the “Eight Doors” and five foot work patterns referred to as the “Five Strategic Stepping patterns”. According to the Tai Chi Chuan classics the eight Jin patterns are related to the eight trigrams (BaGua) and the five foot work patterns are related to the “Five Elements”. Jin refers to Chinese martial power it is a combination of “Li” (muscular power) and Qi (a term for universal energy). The eight trigrams are Heaven, Earth, Water, Fire, corresponding to the four main sides, and Wind, Thunder, Lake and Mountain corresponding to the four diagonal corners. The five elements are: Metal, Water, Wood, Fire and Earth. Peng (Ward off), Lu (Roll back), Ji (Press) and An (Push) are the four major Jin patterns that have become the four major crucial foundations of the Tai Chi Chuan practice. Cai (Pluck), Lie (Split), Zhou (Elbow) and Kao (Bump) are four supporting Jin patterns that make tai chi chuan a well rounded martial art. Then add the five strategic stepping patterns (Front, Back, Left, Right and Central Equilibrium) and you have the complete martial art of Tai Chi Chuan.

Diagram of the Thirteen Postures 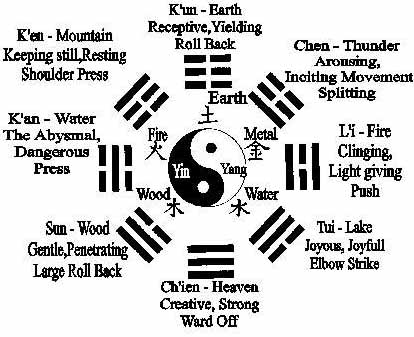 The word Peng in Chinese culture refers to two moons supporting and harmonizing with each other. In this action your arms are arched like as if you were hugging a tree, your chest is concave and your back is rounded. This action is very important aiding in your ability to yield as well as storing Jin in two bodies bow’s for attacking. Tai Chi Chuan uses six bows in the body two arms and two legs are four bow’s allowing you to store Jin and then release it.The torso having two bow’s as well the spine bow and the chest bow. Peng is a fundamental part of your Tai Chi Chuan training and must be understood before being able to apply Tai Chi Chuan as a martial art. Peng is used in almost every Tai Chi Chuan posture, giving you the ability to store Jin and release Fajin (meaning release of power or striking).

Lu Jin refers to yielding Jin, leading Jin, and neutralizing Jin all included in ward off Jin. The ancient oral key implies Lu is “leading the Jin into emptiness”. To do this you will lead the Jin past your centerline in order to neutralize it by leading it to emptiness There are two ways to practice Rollback “Small Rollback” and “Large Rollback”. The use of coiling, leading and neutralizing is what makes both these methods successful.

Ji is a Jin pattern designed for close range Tai Chi Chuan fighting. Ji can be used for a variety of pressing attacks such as; both hands pressing each other, one hand pressing the other wrist or one hand pressing your forearm. It can also be used as a defense by squeezing both elbows of your opponent to disrupt his power. A means to settle the wrist or press the base of the palm forward. This Jin can be used both offensively and defensively. Offensively it can be used to strike downward, straight ahead or upward giving you many options and follow up possibilities. As a defensive tool it will allow you to seal incoming attacks from the fist, forearm, elbow, shoulder, knee and foot. 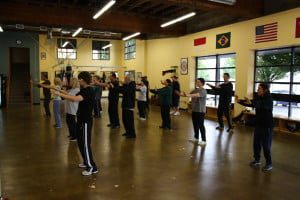 When using Cai Jin you should not grab. This will make you tense and give your opponent the chance to find your center more easily. When you pluck normally it is like a hooking motion using your thumb and index or middle finger. It is common to apply the pluck as you are pressing on cavities “pressure points”. When cavities are pressed this will cause numbness and make it more difficult for your opponent to escape. As you are plucking you should continue the movement till your opponents base is disrupted or it may give him the option to counter with an elbow or shoulder butt.

Lie means to split. In order to generate Lie power you will need two forces moving in opposite directions. One is used to attack while the other is used for a balancing force, sometimes simultaneously yielding to an attack. Peng Jin is used with Lie to give you power in the spine and chest bows.

Using Zhou Jin in Tai Chi Chuan you have the option of neutralization, striking or coiling in order to control your opponent. Commonly used in close range fighting. When used for neutralization it is commonly used to prevent your opponent from plucking, controlling, sealing or squeezing your elbows. You can also use Zhou Jin for Qin Na techniques (Grabbing, locking and pressure point attacks). Peng Jin is also used with Zhou Jin.

Kao Jin also used in close range fighting. Kao is using any part of your body to bump your opponent off balance. You can bump with your shoulders, head, arm, chest, back, hips, knees, etc. to disrupt you opponent’s base and set up a striking attack, lock or throw.

Before you apply the Thirteen Postures five footwork patterns of Tai Chi Chuan it is important to have good root in stationary Tai Chi Chuan push hands. Developing this foundation is essential to have a solid Tai Chi Chuan push hands practice. From this stationary training in Tai Chi Chuan you will build up your awareness, alertness, and strategic body actions such as weight shifts, yielding neutralizing and turning to the sides. Then you can apply the foot work patterns of moving forward, back, left, right and central equilibrium. One of the first and most important things you should develop while cultivating a Tai Chi Chuan push hands practice is learning how to be more rooted. Standing meditation will help you develop this faster than any other training. After you develop a good root you will need to learn how to yield, yielding is tricky because you are under pressure but you have to relax in order to stay illusive so your training partner cannot find your center. This skill takes years to develop but you will have fun along the way enjoy your training.

If you have any questions about the Thirteen Postures of Tai Chi feel free to contact us.