The Kickboxing Snap Kick is a Light, But Fast Kick

A snap kick is a fast kick that is relatively light in power, but because of its speed and target, is rarely blocked effectively. It’s also one of the most commonly used kicks in kick boxing, particularly in street applications. This kick, as you might have guessed from the name, involves a quick upwards snap of the foot and lower shin into the opponents groin. It is best performed with a lead foot, as it’s meant to be quickly disabling to an opponent who isn’t expecting it. You’ll start, as always, in your basic stance. Lean back, transferring your weight onto your back foot, and raising your lead leg until your thigh is parallel with the ground (chambered). The kicks speed comes from this position, as instead of trying to kick the whole leg into the opponent, you’ll simply snap your shin into their groin. This will cause them to cross their legs, double over, and give up (unless they are wearing a cup). 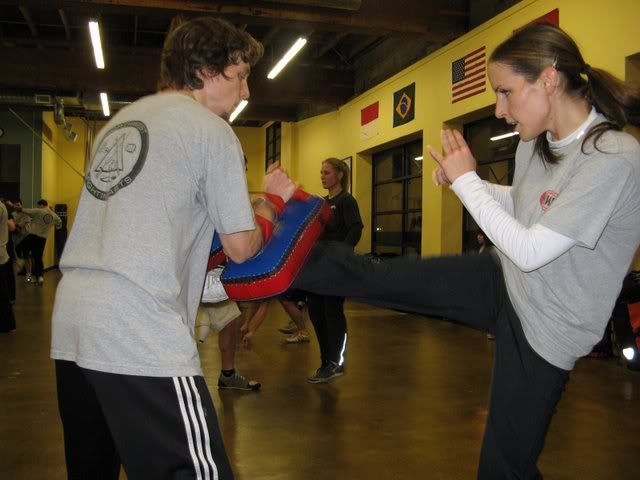 To get a feel for the speed behind the kick, trying kicking from the raised leg position over and over without resting your lead foot back on the ground. This will not only help improve your balance, but also help you learn how quickly you can kick. Among martial artists who’ve perfected the speed of the kick, they like to say the snap doesn’t reference the speed of the kick, but rather the sound their uniforms would make at such a high speed. Since most gi are rather loose around the ankle, a proper snap kick results in a sound coming from the cloth snapping, like a towel does when you roll it up and flick it at someone.

It should be noted that not all opponents will necessarily be struck in the groin, particularly those who are standing in a stance like your own, with one leg forward. This offers some protection against the distancing of the kick, but not a lot. If you find you are facing someone with a proper stance, you can go ahead and try to hit their groin, but the chances are they will simply scoot back a few inches and you’ll miss, leaving you off balance and out of guard. In these situations, it’s best to aim the snap kick at the inner part of the thigh. This sounds like an odd and not necessarily vulnerable place to strike, but it’s actually well suited for targeting. This is because in humans, one of the largest blood vessels in the body, the femoral artery, runs through this area and down the leg. By performing a snap kick into the femoral artery, you can interrupt blood supply to the leg temporarily, cause the opponent to lose feeling and balance in the leg just for a second. A second is all you need to get the upper hand in most fights. Even if the kick doesn’t affect the femoral artery as strongly as you would like, the inner thigh is still soft and fleshy, with little in the way of striking a few soft tissues.