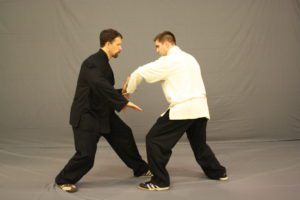 For the most part if you were to ask the average person what they thought Tai Chi was, you would find that they will tell you that it is form of exercise and meditation. At the same time, if you asked the same person their thoughts regarding Wing Chun Kung Fu, they would most likely tell you that it was a form of fighting martial art. Follow these questions with one regarding who might fare better in combat that involved Tai Chi vs. Wing Chun and the average person would probably place their bet on Wing Chun.

This may be because in their minds when you pit Tai Chi vs. Wing Chun you are taking a passive, non-aggressive defensive martial art often referred to as Pushing Hands, against a combat style martial art referred to as Sticky Hands. But before you jump to any conclusion, you should take the time to watch a skilled person in each of these martial arts practice his skills. You might be surprised at how similar they are to each other, however despite this there are several significant differences.

When you watch a person who is skilled in Wing Chun Kung Fu or Sticky Hands you will notice that he will constantly be looking for the smallest opening through which to strike his opponent. He does not need a strong stance for this and generally relies on his own body weight to provide the power needed to land a successful punch in his opponent’s vulnerable spots. The average expert in this art understands that with the right skills and knowledge he does not need to worry overly about his stance.

Now if you take the time to observe a skilled master of Tai Chi, you will find that the opposite is true. When you look at Tai Chi vs. Wing Chun, you are going to see that Tai Chi Chuan is very much about stance. As a defensive art the master will maintain a stance that allows him to sink back away from his attacker and in doing so absorb much of the energy that is behind the attack. Does this mean that the only thing a person practicing Tai Chi can do is defend himself and live to fight another day?

In fact quite the opposite is true, what it does mean is that the true Tai Chi master will be able to deflect the energy of his attackers and by doing so remove their sense of balance. In doing this they leave themselves wide open to attack and then defeat. The two styles of fighting are like oil and vinegar because despite the fact that they are similar, they are at the same time vastly different. Perhaps if you are looking for the ultimate in martial arts, you should be concerned less with Tai Chi vs. Wing Chun and learn to combine both as this would give you the advantage in both attack and defense.