Yip Man was a Grandmaster of Wing Chun Kung Fu. He is credited with opening the art to westerners and championing the Art of Wing Chun, training many masters to follow him and leaving a legacy that spans the globe.

Yip Man’s first Sifu was Chan Wah-Shun. It is said that when Yip Man first sought to study under Chan Wah-Shun he rebuffed. He persevered committing everything he had as a thirteen year old to pay for his lessons. He determination and willingness to sacrifice convinced Chan Wah-Shun to accept him as his last, and youngest disciple. Sifu Chan Wah-Shun died three year after accpeting Yip Man as a student. Sifu Yip Man completed his studies with Ng Chung-sok and finally an elder fellow disciple of Wah-Shun’s, Leung Bik.

Sifu Yip Man did not immediately begin to teach Wing Chun. At twenty-four he moved to Foshan province and joined the police force. He taught peers and relatives but did not open his services to the public. During the Japanese occupation he moved to the village of one of these students. After the war Yip Man returned again to Foshan and his role as a police officer. His role as a teacher of Wing Chun was, in a way, forced upon him. Yip Man was an officer of the Kuomintang (The Chinese Nationalist Party). When the Communist party won with Chinese civil war in 1949 he chose to relocate to Hong Kong. He opened his first school upon arriving and had to maintain through thin times. After some time word of his ability as a teacher and the exploits of his student spread and his school became a center for the study of Wing Chun.

Sifu Yip Man was a deeply talented instructor. Not content to simply train his students in the forms he challenged them to research and discover the reason for and philosophies behind the movements. This perhaps contributed to his disciple Bruce Lee’s constant questing to more deeply and purely understand the martial arts. He was a great man and a master of his art of Wing Chun. 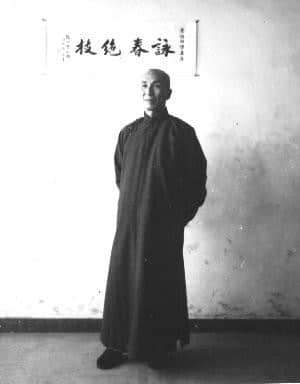