Should I Learn BJJ Takedowns?

Some grapplers don’t like learning BJJ Takedowns because they think that it isn’t going to be useful to their careers. However, this couldn’t be further from the truth. In reality, whether you’re in a competition or street fight, take downs are going to be of the utmost importance. In the subsequent sections of this article, we’ll explain why they are so important.

BJJ Takedowns Give You An Edge Over Many Grapplers

Let’s face it: not all grapplers are going to be that efficient in their take downs. While many of them are perfectly comfortable performing an arm bar from their backs, not all of them will know how to effectively execute a double-leg take down. This is one of the reasons why wrestlers (with no BJJ experience) tend to perform pretty well in Jiu-Jitsu tournaments. 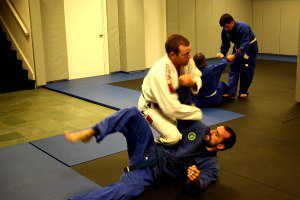 They may not have the best skills on the ground, but they earn a lot of points from their take downs and control. As a BJJ artist, you need to spend just as much time working on your take downs as your ground game. In a real life self-defense scenario, being able to take down an opponent is very useful in taking control over the fight and keeping yourself safe.

What BJJ Takedowns Should You Learn?

There are literally hundreds of different take down combinations that you could spend time learning. However, all of them can be broken down into a few basic setups and positions:

• Double-Leg Take down: With this take down, you’re basically grabbing
both of your opponent’s legs to perform the move.
• Single-Leg Take down: This move requires only one of your opponent’s
legs to perform.
• High-Crotch: This is a slightly more advanced technique that requires you
to have an opponent’s arm, as well as an arm up behind their groin area,
to perform the move.
• Over-Under Throws: Over-under throws are general classes of throws
happen in the “over-under” position with your opponent. Throws are
exceptionally useful against opponents who are already in close range of
where you are.
• Trips: Finally, there are trips, which are quite efficient and require you to
place on of your legs or feet behind your opponent’s to take them down.
These five types of take downs can essentially be broken down into several
subcategories of moves and techniques. For example, you can perform a high-
crotch followed by switching over to a double leg. If you are performing an over-
under throw and it doesn’t work, that’s okay. Then you can simply switch to an
inside trip or single-leg take down.