The Roundhouse Kick is a Powerful Technique

One of the greatest techniques of kick boxing is the 45 degree roundhouse kick. This is a classic kick that can be light or strong, and there are many points of contact depending upon the style of martial art, the intended target, and the intended damage or power behind the kick.

It should be noted for safety and disclaimer purposes, that this is NOT a safe kick to perform without supervision, because it can easily cripple an opponent when striking at their limbs and joints. Many martial artists and MMA fighters say it’s like being hit with a bat, and like any bat, it can cause permanent injury. 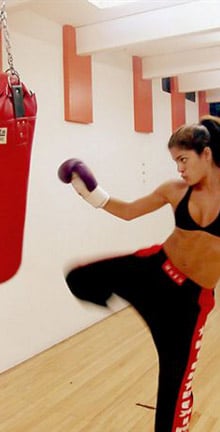 To start, as always, begin your technique by assuming your basic fighting stance. This is a power kick, so we’ll be using the back foot for the attack. Instead of going to a chambered position like you do with so many other kicks, you’ll instead attack directly, swinging the back foot towards an opponent’s leading leg. For street applications, you’ll be using your shin as the striking surface, and you will be kicking at the outside of the opponent’s knee. Bring the shin around from the back position, transferring your weight onto your lead foot. Use your hips and abs to rotate the leg, allowing your body to power the kick into the opponent’s knee. This will crush the knee and tear the median collateral and anterior cruciate ligaments, causing permanent damage and requiring professional medical attention.

Should you find it more advantageous to cause nerve damage instead of crippling an opponent, you would perform the same motion and kick, again using the shin as the striking surface, but instead of aiming for the knee, you would aim for the mid-point of the outer thigh. The sciatica nerve runs along here, and if struck properly, can result in numbness or temporary paralysis of the leg, giving you the upper hand in a fight. The kick can also be targeted at an enemy’s ankle, and used with a follow through as a sweep to make them lose balance or even go to the ground.

For applications in the training rooms, you will instead aim at the calf or thigh of an opponent, and use your instep instead of the knee as the striking surface. This is far less likely to result in serious or permanent damage, but should still be performed under trained supervision.