Bruce Lee Grappling?  He is far better known for lightning-fast strikes, and creating Jeet Kune Do (which we do teach, here at Northwest Fighting Arts).  Bruce Lee borrowed techniques from many martial arts to create Jeet Kune Do (JKD) (including various forms of grappling).  Because of this, many people dubbed Bruce Lee the “Father of MMA”. 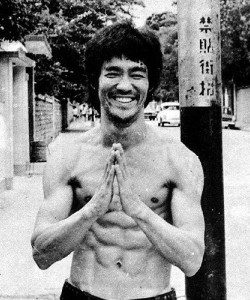 Though grappling plays a secondary (or even tertiary) role in JKD and his movies, it’s still there.  It’s fun for grapplers to look through old film clips to see him finish opponents with submissions (or to see him counter submission attempts).

Here is a short compilation video showing grappling in three Bruce Lee movies: Enter the Dragon, Return of the Dragon, and Fist of Fury.

Bruce taps an opponent with a crucifix-style arm bar in the first clip, from Enter the Dragon.  The second clip, from Return of the Dragon, has Bruce finishing an opponent with a standing guillotine choke.  The third clip, from Fist of Fury (also called “The Chinese Connection”), has Bruce countering an arm bar by biting his opponent on the leg.  This works because it’s a movie.  In real life, however, Bruce would have a broken arm and his opponent would have a small bite wound on his calf.

The crucifix is a brutal submission.  It’s one of those submissions that’s also psychologically very demoralizing.  Your arms are spread wide, and thus you feel completely helpless as your opponent chokes or arm bars you (or both).  With a gi, you have the option of applying the choke.  The arm bar version can be applied gi or no-gi.

Master Rigan Machado taught a seminar at Northwest Fighting Arts in 2015.  He taught several techniques that incorporated the crucifix.  This video clip shows him applying the crucifix from the quarter position and finishing with a collar choke.

Another Rigan Machado video from that same seminar demonstrates the crucifix setting up an arm bar.  This version is more similar to the version demonstrated in Enter the Dragon.

You can apply the guillotine from many positions, including the guard, crossbody, 1/2 guard, and standing.  It’s easier to finish this move if you are grappling no-gi, but it certainly still works just fine as a gi technique.

The following video demonstrates the standing version of this choke (as seen in the clip from “Return of the Dragon”).  It was shot at Northwest Fighting Arts during a seminar.

Don’t do this one.  It’s a fun way to see Bruce get out of a bad situation in a movie, but you’re asking to get your arm broken.  Biting the leg is also a sure-fire way to aggravate your training partners 🙂

There are several viable options for countering an arm bar, depending upon the position you’re in and the energy that your opponent is feeding you. 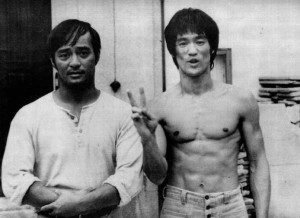 Though Bruce Lee was certainly better known as a striker, he did not neglect grappling.  He believed firmly that martial artists should be well-rounded.  In this spirit, I would therefore encourage all grapplers to familiarize themselves with basic stand-up striking and footwork.

If you are in the Portland, OR area and are looking for grappling or striking classes, come check us out at NWFighting.com.