What is Muay Thai?

Different martial arts around the world originated for different purposes. For instance, Brazilian jiu-jitsu was created for self-defense. Boxing was created as a form of entertainment. What is Muay Thai? Muay Thai is a form of kickboxing that was created out of necessity in Thailand some time ago. While its roots can be traced as far back as 1600, the sport didn’t really start to gain worldwide recognition until after the 1900s.

What is Muay Thai?

Muay Thai is The Art of Close-Distance Fighting

In its purest form, Muay Thai is the art of close-distance fighting. More specifically, it’s a form of kickboxing that focuses on close-distance strikes including elbow strikes, knee strikes, and various strikes from the clinch position. Despite what some people believe, there are very precise and effective techniques associated with these close-distance strikes, most of which can do a lot of damage when inflicted properly.

In other cases, Muay Thai can also be referred to as the “art of weight weapons”. This is because it utilizes eight primary striking “tools” during combat: knees, shins, elbows, hands (two of each equals eight). Muay Thai also focuses on a form of grappling called the “Clinch”. Although, no real grappling techniques take place – it’s more striking than anything else, all from a really close distance.

Learning Muay Thai – What to Expect

Learning Muay Thai, was with any form of martial arts, is based on building up a strong foundation of the techniques involved. As you progress throughout your training, you’ll be able to customize these techniques to better-suit your overall fighting style. Muay Thai can help develop cardiovascular-endurance, power and speed. It’s a sport that revolves a lot on “muscle memory”, which is basically the act of repeating a specific technique so much that it virtually becomes second nature when it comes time to use it in the ring. 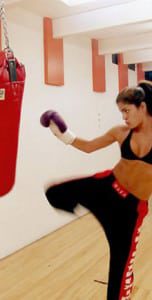 What Is Muay Thai?

What is Muay Thai? Today, Muay Thai is taught all around the world, and is always evolving. As a result, there may be different variations in teaching styles depending on where you go to learn. For example, today you’ll find that a lot of western Muay Thai boxers use skillsets that resemble that of western-style boxing. What is Muay Thai going to be like in the future? While specific punching combinations might change overtime, there’s no doubt that its core values (those that revolve around elbow strikes as well as knee strikes) will remain the same.