The key to a good jab is proper alignment and unifying the whole body into the same movement. 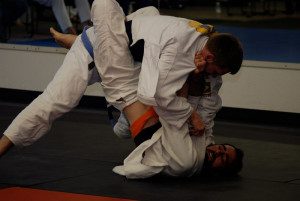 The lead knee is slightly bent. Locking it would cause counter force and interfere with your movement.

The hand moves as though it is on rails during the strike and recoil. It fires out and back in a straight line. The chin is tucked and at the extension of your strike the left shoulder rolls up to the cheek, hiding the jaw from a counter hook punch. The elbow points down the whole time, never let it flare out to the side as this is an obvious tell. The rear hand is in contact with the cheekbone in the “on-the-phone” position.

The movement of the Jab punch starts in the hand with the whole body driving behind it like a wave. Turn the hips and drive the weight forward while twisting through the back and driving the shoulder forward as well. This incorporates the strength of the body, feet, legs, hips, core and arm into the jab punch and delivers it with significant force.
Similarly, the whole of your body draws your jab punch back. Using the core rather than just the arm brings your back to a solid guard considerably faster than simply using the muscles of the arm.