In MMA, there’s no doubt that fighting a bigger, stronger opponent can be quite the challenge. Remember that just because two fighters weigh roughly the same, doesn’t mean that one of them isn’t stronger, taller, or bigger than the other. If you are a fighter with a smaller build and figure, use the following MMA drills, tips, and strategies for dominating opponents who are larger and stronger than you are. 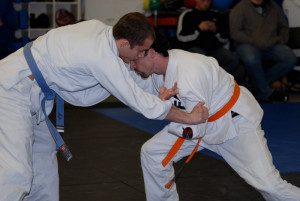 The best and most effective way to increase your chances of defeating a larger opponent would be to close the distance as quickly as possible. The beauty behind grappling and submissions are that you can tap anyone out, regardless of their size. An opponent who is taller would love to keep your far away, since they can ultimately reach you with their punches while you cannot strike in return.

To close the distance, you should focus on MMA drills that rely on takedowns and clinches. More times than not, it can be difficult to go straight for a takedown against a larger opponent. Instead, you should transition here from the clinch. To get into the clinch position, start by faking a punch or kick and immediately shooting in either double under hooks or double overlooks on your opponent. From here, their large size becomes less and less of a factor.

If you have perfect technique in your strikes, takedowns, and submissions, it will be difficult for even the largest opponents to stop you. Take the Gracie family for example, who managed to dominate bigger and larger opponents for years while relying solely on their impeccable grappling techniques.

When performing MMA drills, don’t be shy around repetition. In fact, it is recommended that you perform individual moves and combinations at least 10,000 times before you can even consider yourself proficient enough to be called a master. Be sure to focus on strikes, clinches, takedowns, and submissions during your drills.

The beauty behind grappling in MMA is that size doesn’t play a huge factor in your ability to tap out opponents. This is why you should be spending an ample amount of time perfecting your grappling techniques. Some submissions to master would be the triangle choke, the rear-naked choke, the heel hook, the Kimura, the knee bar, and of course, the arm bar. On the same token, be sure that you work on your transitions as well as your sweeps. A sweep will allow you to get to a dominant position so that you can more effectively use your strikes and submissions. Some powerful sweeps to work on would be the scissor sweep (from the guard) and the butterfly sweep.