Martial Arts for Our Youth

“Three things you should hold and keep. The first is mercy for from mercy come’s courage. The second is frugality from which comes generosity to others and third is humility for from it comes leadership” 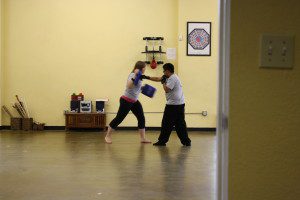 Think of any kids’ martial arts film and freeze-frame the first image that comes to mind. Most likely, you’re picturing a youth in a gi (or wearing a headband), holding a stance for hours on end, maybe working a couple of strikes endlessly as the sun sets behind them. They are learning discipline, overcoming fears, exploring their inner power and proving their worth to themselves and to the world.

Unfortunately though, as movies are known to do, we’re often only shown a sliver of the youth’s story. As a kids’ martial arts instructor, I always wish the viewer could skip ahead ten years in the character’s life. Because then we’d all see what studies show: kids who have experience in martial arts not only do well in life – they excel.

What is it about martial arts that cultivates successful individuals? Kids who do martial arts show marked improvement in physical coordination, endurance, self-discipline, self-esteem and moral development. Let’s break these down a bit and look at specific examples from kids’ martial arts classes, and how they might apply to these leadership skills

What is good leadership?

The term “leadership” has been defined countless ways. Depending on the setting, we’re given vastly different visions of the embodiment of the word. It could be said that leadership is simply the basic qualities displayed by a leader, and without trying we tend to see an individual standing in front of a group of people. We might start applying attributes to this person, and if we were to compare our ideas on this image, we’d quickly realize how unique each perspective was. Some might say leadership is having the power and confidence to guide a group. Others will say that leadership is having the patience and intuitiveness to voice the desires of the group. Still others might say leadership is a trait you’re born with, like long arms or dark hair; a leader to these individuals may be a person who possesses an innate drive to improve or change their surroundings. For the martial arts, leadership is more a philosophy of doing, an attribute that can either be inborn or learned. It is a set of skills carefully tended into being, a way of constantly pursuing improvement in both yourself and your surroundings.

Probably every parent interested in getting their kids into martial arts have dreams of their child “reaching black belt.” 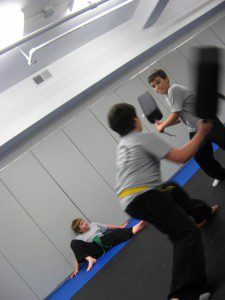 This focus on rank gives kids the opportunity to reap broader benefits by learning to set a goal and reach it. For each belt color, a set of martial techniques are required to be memorized, usually in concert with academic and intellectual expectations. In order for a child to gain rank, they must learn to set aside time each day for their training, inside and outside of class. By doing this, they learn the importance of self-accountability, realizing quickly that the only person in charge of their success is themselves.

Often in class, we split the kids into groups (of two or more) to work drills, attacks, movement and stances. Kids are expected to critique one another, offer supportive feedback, as well as exert control and patience toward their partner or group. Should an argument with a partner arise, they understand that only by diffusing the situation quickly will they be able to keep up with the rest of class. In working with others in this way, kids learn positive conflict resolution.

After a child gains any sort of rank in class, they begin to be expected to assist head instructors in teaching lower ranking students. Instructors guide students to lead with a gentle hand, requiring that these helpers always offer positive affirmation before offering suggestions in another students’ form. By doing so, kids get to see the progress of their fellow students, and feel the joy that comes from helping others learn. In other words, natural, empathetic communication is reinforced; using an organic model to instill leadership skills gradually.

The martial arts also teach kids the importance of community, broadening their awareness to a social level. By getting kids excited about group achievement (such as great class-wide form in specific drills), and rewarding the entire class if the stated goal is met, instructors help students be aware of the effect they have on the whole. This helps kids to be actively involved in class, as well as in their relationships, community, and society.

So what would you see if you could look into your child’s future years into their martial arts training? You’d see a successful, self-motivated, driven and confident individual. A self-starter whose energy and respect for others inspires classmates, coworkers and friends. Wouldn’t you like your child to have such tools at their disposal? It’s never too late for kids to jump into martial arts. Every child has the potential to positively influence the world around them. Let martial arts be the base that gives them the courage to step into their future with a positive attitude, community focus and clear direction – as the leaders of tomorrow.

Contact us about kids martial arts and leadership training

Read about Martial Arts and Academics