“Given enough time, any man may master the physical. With enough knowledge, any man may become wise. It is the true warrior who can master both….and surpass the result.”
~Tien T’ai

The traditional martial arts always include an aspect of mental and spiritual conditioning as part of their training. The practitioner learns not only to discipline the body for combat, s/he learns to quiet the mind, focus intent and hone their intellectual faculties. These attributes and skills are learned inductively over a span of time, sometimes from the physical act of martial arts alone – as a byproduct of concentration on body manipulation. Often, though, in the classical martial arts training, a specific, intentional focus is placed upon the ethical, moral, intellectual and spiritual development of the student.

How will a kids martial arts class help in school?

Traditionally, this was done by utilizing many “non-martial” tools. For example, a teacher could assign to a student various forms of meditation, facilitate discussion or memorization of proverbs (like the one quoted above), adherence to a religious practice of choice, or require a minimum of primary and higher education. 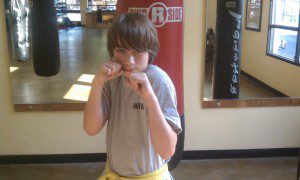 This mental training provided teachers with well-rounded, calm, intellectual pupils who could easily understand the concepts of a Peaceful Warrior; as Tsukahara Bokuden, a famous Japanese swordsman of the 15th century, said “Mental bearing (calmness), not skill, is the sign of a matured samurai.” That is, traditional martial arts training considers the discipline of the body to be the novice goal – a true practitioner is one who aspires to discipline the entirety of the self. It is far easier to teach a specific muscle set to fire (to block or attack) than it is to teach the mind and spirit to quiet.

In modern martial arts programs, it is far less likely that you’ll find these sort of extracurricular training in a studio’s curriculum. There is the question of allowing a student’s spiritual path to be their own – religion is often a matter of family, not martial organization, after all. Meditation can be tricky to teach, especially to children, without first presenting the entire lesson plan to parents for approval, so that the intention of such mental work can be made clear. Kids classes, too, must be kept to a strict time restriction in order to keep kids’ attention. If an instructor is limited to a forty-five minute slot to work with students, it’s likely s/he will focus more on technique than moral, academic or spiritual concepts. Even without this intentional focus, though, kids that practice martial arts often show higher academic marks than children without martial experience. Why? What could martial arts have to do with academic achievement? Through self-discipline and cultivation of solid self-confidence.

In today’s hectic, competitive world, a child’s educational success says much for their future opportunities. A child with good grades, good study habits and a positive attitude toward the hard work required to meet such high expectations meets adult life a step ahead of the crowd. Martial arts helps to foster these traits, by providing a structure for productive growth, a foundation to build upon. These skills start becoming ingrained from day one of a martial arts class – when the student is asked to show self-discipline throughout class, and is rewarded with affirming praise. At first, expectations are set by the teacher. As a student of martial arts gains rank, however, the teacher backs up to allow the student to set their own goals. Eventually, a seasoned martial artist (even a child martial artist) becomes his or her own best critic, always seeing room for improvement. The rank and testing system of martial arts compliments this process by always giving the student something to work towards. A student sees the more advanced students practicing a skill she wants to learn, and then aspires to learn her own curriculum to her highest potential so that she can pass her test – and move on to the techniques she desires to learn.

While spiritual and moral discussion is not always present in modern kids martial arts program, academic achievement requirements for testing usual are. Often there is a “B average” rule that students adhere to – when you reach intermediate skill level, part of your test requirements are to have at least B average in all school grades. This both requires that the student be well-rounded in their life skills and offers the martial arts studio grounded students, who will assist instructors and provide positive influence for fellow students. In order to recognize such accomplishments, there may be a patch or stripe added to the student’s uniform, a mark of pride to display within class.

In addition to providing general improvement in academic achievement, martial arts is also a wonderful activity choice for children with learning differences. Studies done with children living with such unique learning patterns as ADD and autism show clear benefits of working hand-eye coordination, complex patterning, and varied physical movement. Martial arts offers such a child all these challenges and more, in a supportive community of patient classmates and instructors.

This basis of discipline and focus, in combination with the healthy body and mind cultivated through training in martial arts, will allow your child to achieve their highest potential. With the ability to focus on what it truly important and persevere to completion, any student can reach the goals they themselves set. The martial arts provide a method tested over hundreds of years – and prove with each student that anything is possible.