There are a number of sticks and bladed weapons used by the practitioners of Kali, Eskrima and Arnis. The sticks or blunt weapons of kali, eskrima and arnis include: the yantok (also called baston or garrote), with standard lengths ranging from twenty four to twenty eight inches; the largo mano yantok ranging from twenty eight-thirty six inches; the dulo dulo, a short stick about four to seven inches in length and held in the palm of the hand similar to the Japanese yawara stick; and the bankaw, or six foot long staff. A wooden dagger twelve to fourteen inches in length will also be used sometimes in the shape of a basic round stick or rattan and sometimes carved to simulate a daga.

There are a variety of bladed kali, eskrima and arnis weapons from short metal daga’s of many sizes, balasong’s (the Filipino fan knife) the handle is two piece and attaches to a swivel enclosing the blade when shut and the karambit (a hook shaped blade with a hole to fit the finger). With the longer blades you will see a wide variety of blades here I will name a few. The bolo, a common farm tool in the rural areas around the Philippines; the barang, a flat-headed blade; the binikoko, a longer blade named after a porgy fish; the dinahong palay, which was named after the poisonous snake; the kris, a sword used in the Islamic southern provinces that sometimes has a wavy blade; and the kampilan, which has a fork tipped blade also popular in the Islamic south.

Some of the flexible weapons include: the sarong (a large tube or length of fabric often wrapped around the waste and worn as a kilt by men and a skirt by women throughout much of South Asia, Southeast Asia, the Arabian Peninsula, the Horn of Africa and on the pacific islands), the ecut (handkerchief), the nunchaku (from Southeast Asia) well known with the Japanese martial arts, the whip or bull whip consists of a handle between eight and twelve inches in length, and a lash composed of a braided thong between three and twenty feet long at the end of the lash is the “fall” and cracker or popper. The fall is a single piece of leather between ten and thirty inches in length. 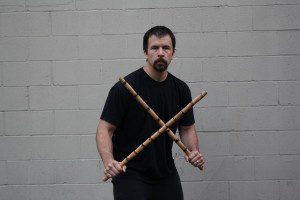 The projectile weapons of kali, eskrima and arnis include: the bow and arrow (a bow is powered by the elasticity of the bow, similar to that of a spring as the bow is drawn energy is stored in the limbs of the bow and transformed into rapid motion when the string is released, with the string transferring the force to the arrow). Blowguns or sometimes called blow tube or blow pipe, is a simple weapon consisting of a small tube for firing light projectiles (poison is often applied to the darts that are fired). Darts can be used to describe a wide range of projectiles from heavy spear like ammunition to light blow darts used in blowguns and slingshots a small hand powered projectile weapon with a Y shaped frame with two elastic bands tied to a leather pouch used to hold the projectile.

The weapons of the body include fists, open palm, knife hand, backhand, fingers (used for pressure points, clawing and jabbing), forearms, elbows, shoulders, knees, shins, feet and head. Although anatomical weapons are not commonly viewed as weapons, their proper development is crucial and a valuable asset to the training. Many death matches have been won by using the bodies weapons. The combatant would draw the attention with the weapon in one hand while distracting the opponent and finishing the fight with a strike from the empty hand.

Read on about Stance work in Eskrima