The jab is a light striking technique, and is often used in conjunction with a follow up strong strike. Many light jabs can be used to probe an opponent’s defense, or to cause them to lower their guard in another area, making an opening for your next strike. Since it is a staple technique, let us learn how to perform a proper jab. 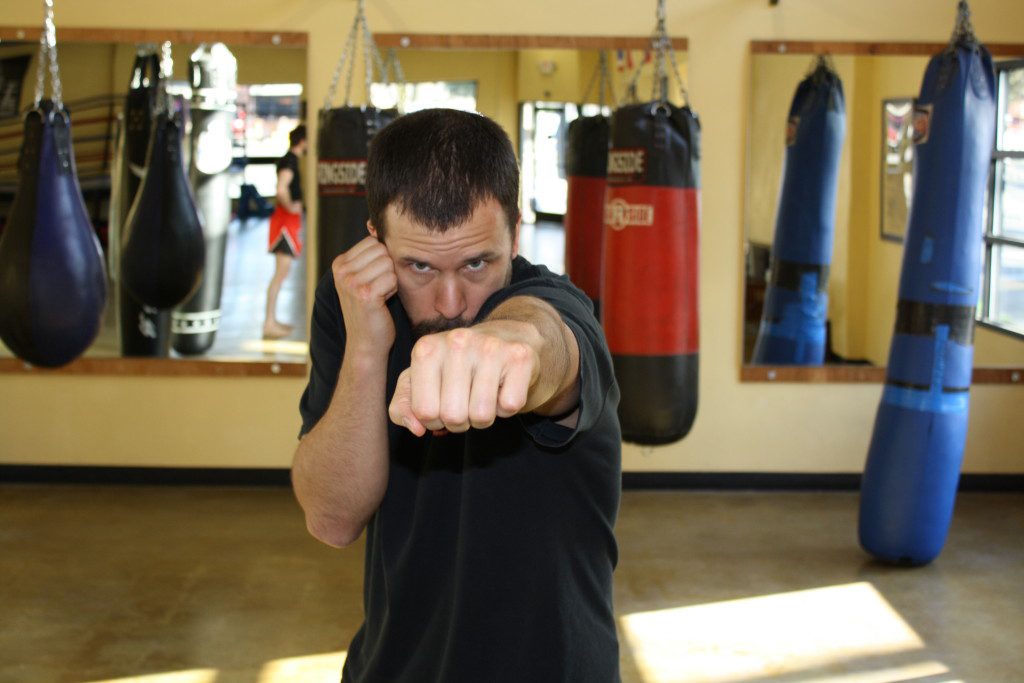 A jab punch starts off from your fighting stance position. Assume your sparring or fighting stance position, remembering to keep your hands up and open. When you begin the strike, you actually don’t close your fist and then strike. This is because it would be an obvious tell to the opponent that you are planning a jab, and they may react accordingly, moving to stop the strike before you can even begin. You begin the jab by moving the hand forward and closing the fist at the same time, rotating your hand so your fist is parallel to the ground. You should complete your fist just before the moment of impact. After a jab connects, resume the guard position in your basic stance once more. For a more powerful version of the jab, add a half-step during the forward movement. A half step would be moving your lead leg forward about 6-8 inches and placing it firmly on the ground just as a punch connects. This slight rocking motion from the half-step adds some more body weight and gravitational momentum to the strike, which can make the difference between being blocked or breaking an opponent’s guard.

Your jab should be aimed at the opponents weak points, going for the eye, cheek, nose, or chin. Striking directly on the jaw or forehead is actually rather painful, so don’t try to aim for a glancing blow in those areas. Don’t strike the mouth either, as having someone’s teeth embedded in your hand or tearing up your knuckles is an incredibly painful experience, and also leaves you open to all kinds of gross bacterial infections.

As you practice this strike, keep the first two knuckles (your index and middle finger knuckles) in the lead, as these are typically the largest and strongest knuckles, and should therefore be the knuckles your strike with. Striking with a set of flat knuckles can often break the pinky knuckle, because it isn’t centered over the wrist like the first two, meaning when it strikes a hard surface, it has nothing behind it to transfer force. Don’t think that your first two knuckles are invincible though, it still hurts to hit a hard surface.

One of the ways you can avoid pain in the future is to condition your knuckles by practicing your strikes on surfaces that gradually increase in hardness. Start with pillows, then move to punching bags. If you find that your conditioning hasn’t advanced in a while, cover a particularly hard surface, like a wooden post, with some light padding. This protects your hand while allowing you to increase your conditioning. Increasing the hardness of the surface while decreasing the amount of padding over time will mean you can strike with impunity if the need arises. However, keep in mind that once more, these are self-defense techniques, and should not be used lightly. Remember, always obtain the help and advice of trained professionals before undergoing any conditioning or fighting techniques, as their experience can be invaluable.