Self-Defense: What to do if You’re Attacked 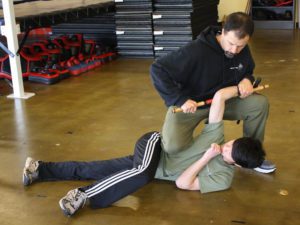 There are two distinct components associated with good self-defense: not looking like a target and what to do if you’re attacked. Not looking like a target is more like an upfront barrier than anything else. It’s designed to deter an attacker from choosing you as a target in the first place. However, if that fails, and you are attacked, you’ll need to resort to plan be and defend yourself. In the following sections, we’ll talk about each component a little more in-depth.

One of the primary ways to avoid looking like a target is to travel with a group. Even if you’re just traveling with a single person, this should be enough to deter an attacker from choosing you as their victim. Secondly, it you need to avoid traveling in less-than-friendly neighborhoods when it gets dark. Studies have shown that the majority of sexual assaults, robberies, and murders take place when the sun starts to down. If you want to avoid becoming a target you should avoid walking around at night without another person there with you.

What to Do If You’re Attacked

In some cases, an attacker will simply catch you by surprise. When this happens, you’ll need to be able to adequately defend yourself. First and foremost, scream as loudly as you can. Assailants who are trying to sexually assault a target rely on the fact that most women aren’t going to put up any resistance. Make sure that you kick, scream, and crawl away as abruptly as you can. The more that you can show that you’re not going to be an easy target, the easier it’s going to be to get away.

Throughout an attack, your primary goal should be this: create distance and run! Fortunately, many self-defense martial arts, BJJ included, teach you how to do this. For example, if an attacker tries to bear hug you, then you can use a slick technique to slide out and hip toss the attacker.

Once they’re on the ground, you can use this as an opportunity to escape. Remember that you don’t need to necessary break a bone or choke out an attacker in order to free yourself. If you can paralyze them for even a second then your chances of escaping go up dramatically.