Can You Defend Yourself

How Long Before You Can Defend Yourself? 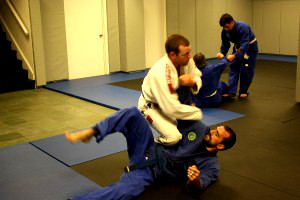 Almost nobody who practices Jiu-Jitsu, or other self-defense martial for that matter, becomes fluent overnight. It just isn’t going to happen, so relieve that expectation right now. The ironic part is that once you stop having such high expectations for your skills, you’ll learn at a much quicker rate. But this still doesn’t answer the question: how long before you actually become fluent at a self-defense martial art? That’s what we’ll answer below.

Perhaps one of the strictest martial arts that you can participate in is BJJ. As far as earning your black belt is concerned, it can take you 10 years or more to acquire it. You might be wondering, “That’s a long time. I don’t know if I could stick with the sport that long. I want to know can you defend yourself quickly”.

First of all, it isn’t as long as you might think. This represents the “average” amount of time that it takes for someone to earn his or her black belt. If you practice hard, study the information that’s out there, and participate in competitions regularly (to fix your mistakes), you may be able to convert to a black belt in much less time.

Sometimes Belt Color Doesn’t Mean As Much As You Think

Don’t allow belt colors to fool you. Sometimes, they don’t mean as much as you might think (there have been purple belts who have won the Abu Dhabi tournament, which is something that is almost always won by black belts). But what does it mean to become “fluent” at defending yourself?

The funny thing is that you can be the worst grappler at your gym and still be very efficient at defending against attackers on the streets. Why is this? It’s because most attackers have virtually no experience with any form of martial arts. Even taking BJJ for a month will provide you with the experience needed to defend yourself.

Competition Jiu-Jitsu is NOT Street Jiu-Jitsu

So, why exactly is there a belt system? This is designed to separate grapplers based on experience. However, it is NOT an accurate representation of how fluent you’ll be when you defend yourself. After all, there are some black belts who are extremely good at tournament grappling (but they haven’t learned ANY self-defense BJJ techniques). In this case, it may actually be that blue or white belt that defends themselves more efficiently in public.

Here’s Master Rigan Machado talking about smart ways to train and the difference in the “old style” of training and the “new” style: