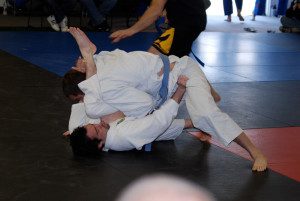 From your kick stance when your deliver your horizontal Muay Thai elbow the non-striking hand pulls into the forehead to defend. The striking arm rotates till the palm faces the ground and the elbow is at shoulder height out from your side. All the power of this technique comes from your core. Shift your weight to the non-striking side as you sharply turn the hip and torso toward the opponent. Allow the non-weighted foot to pivot freely with the movement. When you deliver the Horizontal Muay Thai Elbow, strike with the last two inches of the forearm and put all of your weight and core strength into the blow. Reverse these movements to recoil back into your Muay Thai Kick Stance