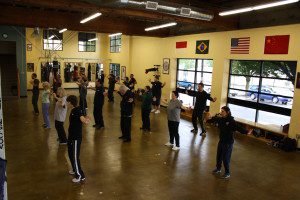 Wu Yu-hsiang (Wu Yuxiang, 1813-1880) who also developed his own Wu/Hao style, which after three generations, led to the development of Sun style tai chi chuan.

Tung Ying-chieh (Dong Yingjie, 1898-1961), Ch’en Wei-ming (Chen Weiming), Fu Zhongwen (Fu Chung-wen, 1903-1994), Li Yaxuan (1894-1976) and Cheng Man-ch’ing were all famous students of Yang Ch’eng-fu. Each of them taught extensively, founding groups that are teaching Yang style Tai Chi to this day. Cheng Man-ch’ing, perhaps the most famous outside of China, significantly shortened and simplified the traditional forms that Yang taught him.

Yang Style tai chi is practiced for many reasons. Some of which include: developing martial art skills, philosophical training, mental training, therapeutic/medical benefits and spiritual training. The practice has a wide range of exercises. You will find slow moving meditative forms, sitting meditation, standing meditation, walking meditation, stretching routines, pushing hand drills (two person exercises), visualization drills, and internal energy/breath work. One of the things I find so attractive to the practice is that it can be used by anyone. The practice can be very intense for the younger more athletic person and can also be used by an elderly person, or someone confined to his or her bed. You can use the strength building exercises at any stage in life to increase your physical well-being or to become a rooted, powerful martial artist.

References on the History of Yang Style Tai Chi Chuan: