Guro Ted LucayLucay was born on the island of Kauai (Hawaii). 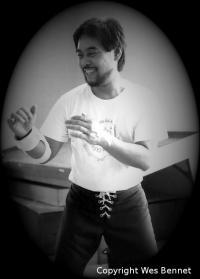 He was exposed to the martial arts from a young age. His father, Guro Lucky LucayLucay, is said to be the originator of Panantukan (Filipino Boxing). Though, Lucky himself would that “it was all Kali…” emphasizing that the weapon and empty hand arts were intertwined and relied on the same principles. As a child Ted was resistant to training and learning boxing from his father. He first forays into martial training were via Judo. He pursued many arts, exploring Wing Chun and Karate. He spent several years training in Hawaiian Karate before branching our into other styles such as Shorinryu.

Some time after moving to L.A with his family he became connected to Guru Dan Inosanto. LucayLucay’s father knew Richard Bustillo who served as Guro Ted’s invitation to the “backyard sessions”; small, focused training groups in Jeet Kune Do and the Filipino martial arts. His father Lucky connected him to the group to study Eskrima but at the time Ted was more interested in the JKD. However, he quickly grew to like them both. In the beginning, when Guru Dan would invited people to stay after JKD class and train in Eskrima, Guro Ted was one of the few who accepted.

Guro Ted LucayLucay’s primary FMA styles were the Serrada style by Angel Cabales, Largo Mano from Leo Giron and Villabralle/Kali from Ben Largusa. The Villabralle system was already in the LucayLucay family as Lucky had learned it directly from Grandmaster Villabralle who was his god-father.

Guro Ted was one of the first to graduate from Dan Inosanto’s Academy in both Kali and Jeet Kune Do. He became somewhat frustrated with JKD elsewhere as it began to degrade into a structured style and system. People’s claims of superior technique or purer lineage were beside the point. JKD in it’s true form was a way of streamlining something to fit the individual. To that end he founded the LucayLucay Kali/Jeet Kune Do Association and Temujin.

The LucayLucay Kali/JKD Asso. motto is to “Show and Do” They taught not to dismiss traditions but that one should be able to apply what they know in a real fight. Theirs was a process of elimination, not accumulation. It’s the basic techniques, trained well, that get a person through a fight.

Guru Ted died young in 1996 due to complications from asthma. He was only 50 years only. He was a fantastic martial artist and a kind, humble man.

Training videos made by Guru Ted are available from the LucayLucay Kali/JKD website.