There are different fighting stances a fighter or competitor will use depending on the type of event, fight or situation. The strategy and style of the competitor will also vary with the event depending on the fighter’s ability and education. Different styles or methods of fighting have strategies that may include hand held weapons, kicking, knees, striking in long, middle or close ranges, trapping, standing grappling and going to the ground. All of these different methods will use different stances to make their strategies be most efficient. We will address these differences as well as discuss the similarities and the basic foundation of any competitive fighter.

All competitors need to have a good root or foundation. This will make them more powerful and harder for someone to knock down or throw them around. 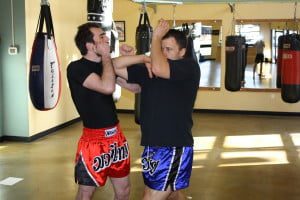 Having a good root will also give you the ability to yield and redirect someone else’s force or attack. In some Taijiquan push hand events, for example, the competitors find a good base and try to throw the other off balance. This will involve no foot work so the stance can be long and low to give a better base without suffering from the detracting inability to move around. In other competitions such as a boxing match, the fighter will need to be very fluid with his foot work, knowing how to move around as well as be rooted. The boxer will need to adjust the stance to have the feet closer together for ease of movement. Both approaches will have advantages and disadvantages so for someone trying to focus on self-defense or a mixed martial art event they will have to adjust to the environment as well as establish where they are strong and how they need to perform to be successful in the competition or fight they are taking part in.

No matter what the competition or goal, we need to develop good foundation. In order for a competitor to have a good foundation he needs to relax. If you are not relaxed your tension will not only slow you down, but will take your weight out of your feet making it easier for someone to disrupt your base. Stand with you feet shoulder width apart and relax slightly unlock the knees and visualize all of your weight sinking through your feet and into the earth. Know keeping this same stance lock out he knees tighten all of your muscles and feel the difference, notice how easy it would be for someone to push you over. This is a simple example you can do to help understand this concept. Now with this understanding of foundation we will take a look at some different fighting methods and discuss why the stances will vary and how they can benefit different strategies or goals.

When using the weapon’s stance: It is important while using a tool or weapon that you know the weapon well. For example when using a knife you can have a shorter stance to have good mobility as well as speed with your attacks, but if you were to try this tactic with a long staff or heavy sword you will soon find you are very unstable and cannot utilize the tool to its full potential.
When using the knife, short stick or any lighter weapon it is good to have speed, mobility and ease to move in a variety of directions or angles. These weapons can be very elusive as well as powerful and precise. As with any weapon you want to have a complete understanding of the attacks and defensive tactics used so when applying them your foundation will not be disrupted. 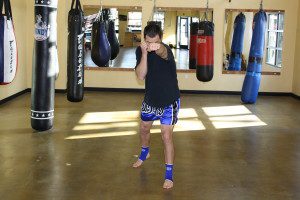 When using a long staff, spear, sword or other heavy weapon you will need to have a wider base and use the feet to guide the weapon. It will give you less mobility, but you can also gain range for attacking, have very powerful striking ability and make it hard for your opponent to engage.

Kicking and knees. This range has a few schools of thought. A taekwondo practitioner or some schools of kung fu will generally have a longer base’s. This is due to the rules of which they compete. There strategy is to try and score a point by kicking the torso or to the head and punching to the body. After the point is scored the competition is paused and the competitor is awarded points. This allows for the competitors to commit to one attack and the need for foot work to retreat when finished is limited. While a Muay Thai competitor will use a shorter more square stance. This enables them to deliver the rear kick faster because the foot is closer to the opponent. In a Muay Thai fight the rear kick is important because they are trying to wear down the opponent and possibly knock them out. So having the shorter stance will aid in giving them a faster powerful rear kick as well as giving them the ability to utilize the powerful knee attacks.

Punching and striking. In this range it is important to have leverage and power in the hands for striking as well as the ability to get in and attack then get out of range to avoid your opponents attacks. In order to have powerful hands your stance will need to be a bit longer than a Muay Thai stance and a bit shorter than a taekwondo or heavy weapons stance. A simple way to understand this leverage is to think about how you would push a car. Bend the knees, sit down, lean into it and push with your hands. This is very similar to how you will put force in your hands when striking. An outside fighter or long range striker will be light in the feet heels off the ground moving around most of the time. A close range striker will generally have heavy feet heels down looking for the body shots and heavy blows. It is good to know how to adjust and be proficient in both ranges, but most fighters will always have a preference.

Trapping and hand or foot immobilization. In this range a competitor will likely take on a longer stance for more control. There will be some movement so it may not be as long of a step as in a push hand competition, but will need to be strong to avoid all of the sweeps and throw attempts. In this range you will be pushing and pulling looking for your opponent’s center to either get the most leverage on a joint lock or for a takedown.

These are just some brief examples of how fighters will use different footwork strategies. As you get more into the arts and refine your skills the adjustments and variations will have more meaning and you will be able to transition from one to the other smoothly.

Learn more: The Eskrima approach to stance and footwork