The striking arm is forty five degrees above the shoulder out from the side of the body. 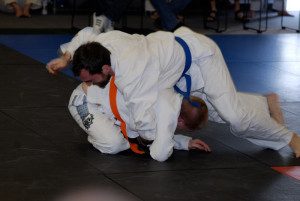 The palm has rotated in until it faces out toward the opponent. The defending arm is in the same position mentioned in the Horizontal and Upward Muay Thai Elbows; wrist braced to forehead. The hip has turned into the movement while the weight has dropped. The hip rotation causes the heel of the foot on the striking side to pivot out.

From your kick stance when your deliver your Downward Muay Thai Elbow move the non-striking hand in and brace it to the forehead to defend. The palm of the striking arm rotates in until the palm faces your opponent. This rotation causes the elbow to rise until forty-five degrees above shoulder height. All the power of this technique comes from your core and the sinking of your weight behind the blow. Shift your weight to the non-striking side as you sharply turn the hip and drop a couple of inches. Allow the non-weighted foot to pivot freely with the movement. When you deliver the Downward Muay Thai Elbow, strike with the last two inches of the forearm, sink your weight and core strength into the blow. Reverse these movements to recoil back into your Muay Thai Kick Stance