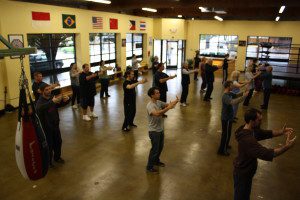 The Chen style of tai chi is the oldest and parent form of the five main tai chi chuan styles. It is third in terms of worldwide popularity compared to the other main taijiquan styles. Chen style tai chi is characterized by its lower stances, more explicit Silk reeling (chan si jin), and bursts of power (fa jin).

The origin and nature of Chen style tai chi is not historically verifiable at all, until around the 1600s when the Chen clan of Chenjiagou (Chen Village), Henan province, China appeared and was identified as possessing a unique martial arts system. How the Chen style tai chi family came to practice their unique style is not clear due to lack of documentation from the formative period and irreconcilable views on the matter. What is known is that the other four modern orthodox family styles of tai chi chuan are traced to the teachings in the Chen family village in the early 19th century.


According to interviews with Chen style tai chi family members there was a family art, which Chen Bu (the founder of Chen Jiagou) brought with him. The family had brought this martial art from Shanxi when the clan was forced to leave. While there are few written sources, this history should not be dismissed too quickly because Shanxi is also the traditional origin of Bagua Zhang and H-sing-I Chuan, which share some of the bio-mechanical foundations with Chen style tai chi chuan.

Historically documented from the 1600s, the Chen family was originally from Shanxi, Hong Dong. First generation, Chen Pu, shifted from Shanxi to Wen County, Henan Province. Originally known as Chang Yang Cun or Sunshine village, the village grew to include a large number of Chen style tai chi family descendants. Because of the three deep ravines (Gou) beside the village it became to be known as Chen Jia Gou or Chen Family Village. Chen village has since been a center of Chen style tai chi learning. Ninth generation Chen Wangting is credited as performing the first formal codification of Chen style tai chi martial art practice.

Before teaching the forms, we often may have the student’s do stance training such as Yi chuan (mind fist) and various qigong routines such as silk reeling exercises. These stance training and qigong exercises are done to condition and strengthen the body to have the correct frame and alignment. This is done so as to be able to develop silk reeling energy (Chan Si Jin) before moving to the more complicated movements that are in the forms.

Other methods of training for Chen style tai chi include using training aids such as: pole/spear shaking exercises, which teach a practitioner how to extend their silk reeling and fa jing skill into a weapon.

In addition to the solo exercises listed above, there are partner exercises known as pushing hands, designed to help students maintain the correct body structure when faced with resistance. There are five traditional phases of push hands in Chen style tai chi that students may learn before they can move on to a more free-style push hands structure which begins to resemble sparring.

In contrast to some tai chi styles and teachers the vast majority of Chen style tai chi players believe that Chen style tai chi is first and foremost a martial art; that a study of the self-defense aspect of tai chi is the best test of a student’s skill and knowledge of the tai chi principles that provide health benefit. In compliance with this principle, all Chen forms retain some degree of overt fa jing expression. This being an important expression for the distinction and beauty of the art is not the most important. Anyone who practices the art should first strive to achieve for health and harmony. One does not have to take it to a competitive level to benefit from the training.

In martial application, Chen style tai chi uses a wide variety of techniques, applied with all the extremities, that revolve around the use of the eight gates of tai chi chuan to manifest either kai (expansive power) or he (contracting power) through the physical postures of the Chen forms. The particulars of exterior technique may vary between teachers and forms. In common with all neijia (Internal Martial Art forms), Chen style tai chi aims to develop internal power for the execution of martial techniques, but focuses especially on cultivating fa jing skill. With the Chen style tai chi practice there are 105 basic fa jing methods and 72 basic Chin Na methods present in the forms.