Recently, in Professor Jeff’s AFT class we worked on broken rhythm Muay Thai strikes. In Muay Thai we often focus on maintaining what is called the, “Thai rhythm.” This rhythm helps to keep the stance solid and helps the timing of your strikes. By having a smooth pace and rhythm to your strikes throwing a combination of two, three, four or even five punches becomes much easier. However, like most things in life, when there is no variation the rhythm becomes predictable. This is why we looked at how you can apply a broken rhythm and surprise your opponent. 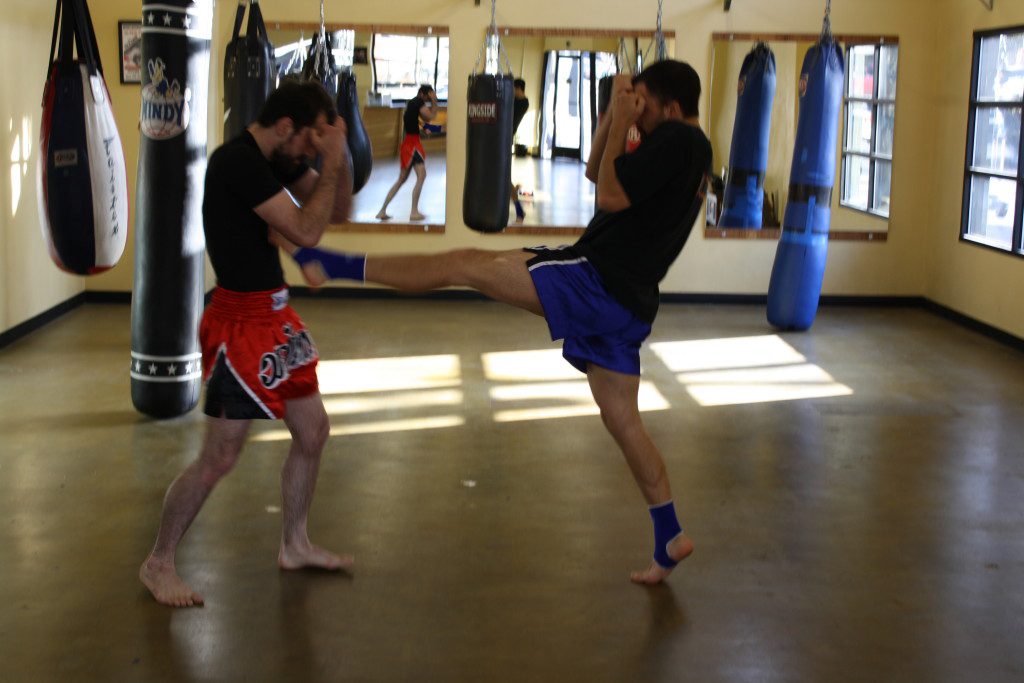 In the beginning of class we worked a couple of combinations that stressed the standard cadence of strikes. The first round we used a shield block to defend and incoming kick and then responded with a jab, rear straight to a switch step and kick with the lead foot. This all occurred at within the Muay Thai rhythm: one, two , three. The next round was similar, a shield block to a jab, rear straight and a Thai kick with the rear foot, again stressing the smooth cadence. The next few rounds are where it got interesting. Introducing the broken rhythm Professor Jeff kept it simple at first. We would defend with a shield block and the respond with three punches: jab, rear straight, jab. Instead of throwing a kick directly after the last punch we paused for a beat and then kicked. That pause broke the rhythm and made strike more unpredictable. We followed this up with a second broken rhythm drill where a left hook was followed by a left kick instead of the traditional right kick.

With the broken rhythm new sequences of strikes are opened up; instead of left, right left, right and combination could proceed left, right, left, left or left, right, right. This unpredictability help throw off the timing and defense of your opponent and can take your striking game to the next level.

Learning how to break from the Thai rhythm during combinations is a difficult new skill; because
following that cadence of strikes is a skill that takes time to get right. Working on new skill sets and techniques is always a challenging and fun part of Professor Jeff’s classes. When the moment comes and it clicks into place it is a very rewarding feeling. It takes dedication and effort to bring all the skills together to become an effective martial artist. In the AFT classes the students take this challenge every time we step on the mats.