As with almost all forms of martial arts that exist in the world today, MMA can definitely be used as a self-defense. In fact, if you had to compare the effectiveness of MMA on the street to other forms of martial arts, MMA would most certainly rank towards the top. The reason why is because it incorporates a mixture of martial arts, and blends them together to create a very diverse and dangerous fighting style. Can MMA be used as self-defense? Let’s analyze this question in greater detail below.

Can MMA Be Used as Self-Defense?

Again, as with the majority of martial arts taught around the world, MMA is a perfect self-defense tools for 1-on-1 fighting situations. Since MMA incorporates a wide range of different martial arts, including jiu-jitsu, judo, kickboxing, boxing, and even wrestling, individuals who are seasoned in MMA technique, and who are in a street fight, shouldn’t have any issue protecting themselves. Unfortunately, MMA is not a suitable self-defense tool for when there are multiple assailants in a street fight

Can MMA be used as self-defense:  MMA Places a Lot of Focus on Ground Fighting

Although no statistic likely exists for the following statement, most people can agree that it’s true: most fights end up on the ground. In fact, it could be said that if neither fighter gets knocked out within the first few seconds, it’s inevitable that the fight is going to end up on the ground. And this is where a lot of people who aren’t trained get into trouble – they put themselves in bad situations and end up getting hurt.

One of the primary benefits of adapting MMA as a self-defense is that it places a large percentage of its focus on ground fighting. Jiu-jitsu is actually the root ground fighting martial art taught within MMA, and it’s been long known that good jiu-jitsu fighters are virtually unstoppable once the fight gets taken to the ground. Once you become experienced in MMA, you’ll know exactly how to achieve dominant positions while on the ground, all while maintaining your control and poise. 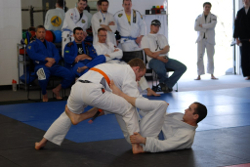 Can MMA Be Used as Self-Defense?

MMA is an Excellent Self-Defense Tool

Can MMA be used as self-defense? Definitely! If you’re searching for a martial art that can keep you safe while on the streets, and that works effectively in 1-on-1 fighting situations, then learning MMA is the way to go.