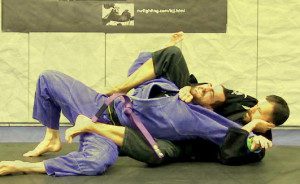 Jiu Jitsu Positions: Taking The Back

Brazilian Jiu Jitsu remains an interesting martial art because it is primarily a ground fighting system. Now, BJJ is not the only ground fighting/grappling art in existence but it is rather unique in the sense that it promotes position over submission and attacks. What does this mean? The art seeks to establish and dominate with certain positions in order to put the BJJ fighter into the best position to submit or strike an opponent. Similarly, the practitioner will also invest a great deal of time learning to escape from Jiu Jitsu positions so as not to fall victim to them. The escapes are more leverage based as opposed to bridging type escapes which require most power, speed, and explosion.

The main Jiu Jitsu positions are the mount, the guard, the knee on stomach, the back mount, and side control. Each one serves similar purposes but all of the positions have their own unique nuances as well..

The mount is sometimes called the saddle position and it basically entails straddling on top of an opponent who is on his back. The mount requires very precise moves to escape from and those who do not know how to escape will open themselves up for submissions and strikes. Commonly, this is because they will overextend their arms of roll to their back. In a sense, the mere fact you mount and opponent takes a lot of work off your hands since you opponent will be prone to making many numerous mistakes.

The rear mount entails taking an opponent’s back and using the feet as hooks into the thighs. This is a terrible position to be in since you really cannot defend yourself very well when having an opponent on your back that can strike or choke at will.

The side control is basically a lateral pin although BJJ practitioners do not really look at pins as an end so much as a means to an end. Commonly, the side control will be the position you see the most in BJJ matches. Mounting or taking an opponent’s back is difficult so often the side control is the best the fractioned can get. That is not to dismiss the value of the side control position as it is an excellent source of offensive moves.

The Knee on Stomach is primarily a transitional position since it does not have effective pinning or holding capabilities. However, it can make an excellent striking position. Frequently, the knee on stomach is taken when an opponent is escaping your pin or you are trying to pin an opponent but cannot and accept the openings for the knee on stomach.

Probably the most popular of the Jiu Jitsu positions is the guard. The guard is really not a singular term. There are many different variations on the guard – various open, closed, and half versions — which can be employed. No matter what type of guard you are using, the purpose remains the same: it is a defensive position with a tremendous number of offensive and defensive maneuvers.

There are other positions which you will see but they are really not Jiu Jitsu positions as they are more judo or wrestling oriented. These would be the scarf hold, headlocks, north/south position, and the reverse scarf hold. While most Jiu Jitsu players do not use these positions, many use them and use them to great success.