Arm locks are a common grappling technique that can be used to get a quick submission, as they are potentially more damaging than wrist locks. These locks affect both the elbow and shoulder of an opponent, and that means greater leverage. As anyone who’s been subject to BJJ techniques can tell you, more leverage means more pain. Despite the dangers of arm locks, they are generally used in more of a submission hold fashion, and are thus viewed as safer. These types of locks, as with many of the wrist locks, are perfectly legal in many sports and competition settings. 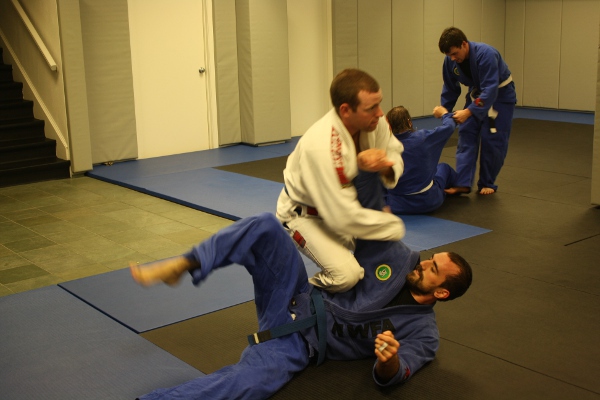 The downside to arm locks is that if they are not performed correctly, it can result in the opponent escaping and even gaining a position of strength. This is because most arm locks are difficult to initiate while standing. The easiest way to apply an arm lock from a standing position is to initiate a wrist lock, and use the opponent’s inclination to straighten out as an opportunity to hyperextend their elbow. From there, you can apply pressure to the elbow or shoulder with the arm that is not engaging the wrist lock.

The classic arm lock that we see in a competition match is often called an armbar, and is initiated after combat has gone to the ground. This is a classic Kodokan judo technique that has been adopted for use in Brazilian jiu-jitsu, and is incredibly effective. So, for the beginner, let’s talk about how to initiate this technique in order to win a match.

Assuming the fight has gone to the ground, let us also assume the worst has happened, and you are forced on the defensive. This means that you are presumably in the guard position, which is the most basic defensive ground technique in Brazilian Jiu Jitsu. For those of you unfamiliar with guard, let’s have a quick review.

Guard position is initiated after going to ground, and the most common guard is closed guard. This means that you have your legs wrapped around the torso of the opponent, and your head is resting on the ground to conserve energy. You should have a grip on one or both of the opponent’s arms, and focus on applying submission moves. By squeezing or straightening your legs, you can apply pressure to their lungs and diaphragm, making it hard to breathe or fight effectively when combined with holding their arms. It’s almost impossible for them to strike effectively from here, and this leaves you in control.

Assuming you are in a guard position, the easiest way to get a submission is to attempt an armbar. Gain control of one of the opponents arms with your own. This is done by taking the arm you wish to lock, and pulling it to your same arm. This means if you wish to lock the right arm, you would pull their right arm towards your own across your chest, using your right hand to lock it in above the elbow. Cross your left hand to their left shoulder, forearm under their chin, and pull towards you while unlocking your guard, placing your right foot down flat, and inserting your left foot at their waist. Push off, turning your body nearly sideways while maintaining control of their arm. Swing your left leg around and up, placing it on their neck. From here, you can straighten into the armbar. Often, the opponent will try to roll away. Simply continue your own extension until you are flat on your back, and the opponents arm will be naturally extended, pressuring their elbow. Arching your hips to provide a fulcrum, you can apply more pressure from there. This results in submission nearly every time.