Attacks from the Mount in Gracie Jiu Jitsu 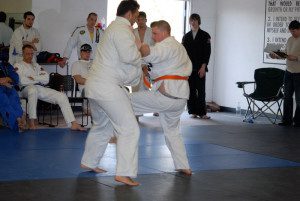 Attacks from The mount in Gracie Jiu Jitsu can be considered the primary Gracie Jiu Jitsu techniques. When
you have mounted an opponent, you will immediately launch an attack on the choke points or
the limbs of the upper torso. Of course, it is also possible to deliver strikes to the head of an
opponent but Gracie Jiu Jitsu prefers the more gentle approach and avoid more violent striking
methods unless there is no other option.

The most common attacks from The mount in Gracie Jiu Jitsu would be:

• Performing a spinning armbar when your opponent overreaches which his arm

• Cross choking the opponent with his Gi or jacket collar

All of these submission moves are high percentage ones and can finish a fight rather quickly.
However, not very many opponents will be willing to allow you to finish them off so easily.
They will give you quite a bit of resistance. This should not prove to be too much of a problem
since you can always flow into the next technique to deal with the resistance.

Often, the way to deal with resistance is very simple. When you perform a collar choke or try to
execute the Americana, your opponent may reach around to grab his or your wrist to alleviate
your control over him. This is not a bad idea but it does open the door to an straight armlock. A
good Gracie Jiu Jitsu player would know exactly how to counter the move with the armlock.

You do need to familiarize yourself with the basic Gracie Jiu Jitsu techniques designed to promote attacks from the mount and you also should develop a strong game for dealing with resistance. Doing so will definitely make it a lot easier to use the mount in the most effective way.