A Guide to the Brazilian Jiu-Jitsu Belt System 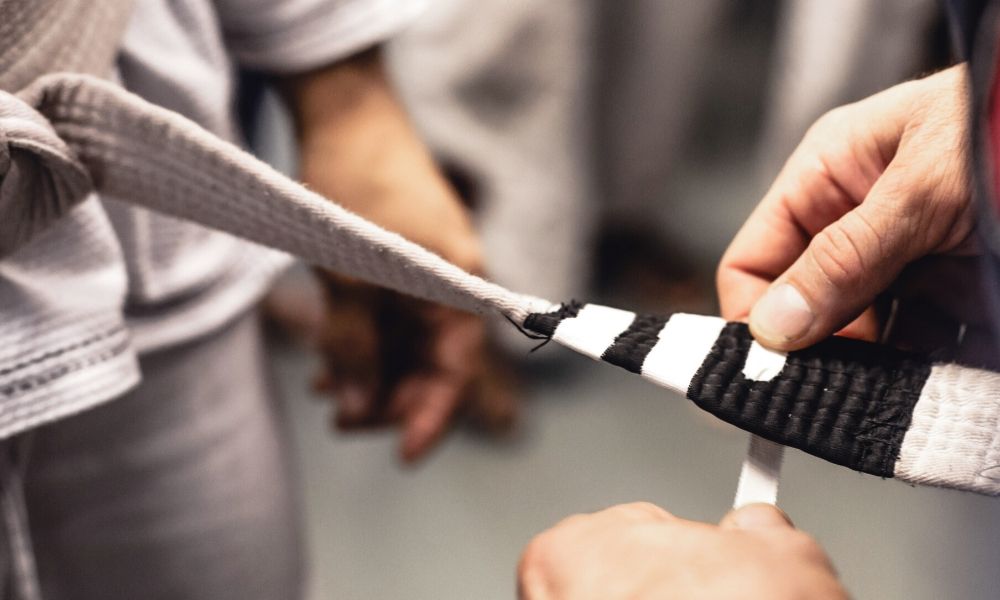 Like some other martial arts, Brazilian Jiu-Jitsu uses a belt ranking system to mark the progress of students as they develop in skill. To the uninitiated, the different colors may not hold much meaning. But for practitioners of BJJ, earning each rank is reflective of the great amount of time and effort that one puts into studying the art. Here, we’ll familiarize you with the different belts and their significance with our guide to the Brazilian Jiu-Jitsu belt system.

The white belt is where all students start. At this stage, you learn the fundamentals of BJJ, both in movements and principles. You should work hard at understanding these basics so that you don’t overwhelm yourself. This will also help you form a solid framework from which all your later skills can work from. For many, physical conditioning itself is another aspect that beginners should improve upon.

Acquiring the blue belt is the first major milestone that you pass in BJJ, and it is therefore highly anticipated for newer students. Generally, a blue belt signifies a person who is familiar with all the rudimentary movements and techniques. This means that you should have a solid defense, be able to escape from common positions, and protect yourself on the ground.

To get to this level, a BJJ practitioner must put in many hours of refining their grappling skills. A purple belt is proficient at utilizing their momentum and minimizing wasted movements. You can also start to see your individual style emerge and begin to perform combination attacks. Along with this, you and your instructor can identify weaknesses that you struggle with. Take this time to reverse those shortcomings into strengths. You’ll be well-rounded and won’t have gaping holes in your armor that opponents can take advantage of.

This is where Jiu-Jitsu players have become truly dangerous and efficient in matches. Having built their defense up in the earlier stages, brown belts can now hone their offense. Because you know all the frequently used techniques, you can stay ahead of opponents by anticipating their moves and countering them effectively. At the same time, others will find it hard to get through your guard or catch you off balance. Brown belts have their own set of specialized techniques that they are confident in, so you’ll have a defined style at this point.

Finally, we reach the black belt—a symbol that represents how deeply you have consolidated BJJ. Few reach this height and those that do have made the art of Jiu-Jitsu akin to second nature. You can attack, defend, and respond to opponents instinctually while you draw from your vast arsenal of techniques and moves. While many people might look at the black belt as the ultimate goal to achieve, you will see that there is always still more to learn. Simultaneously, you may decide to teach and pass your knowledge on to others, opening the path for others to discover and study in Jiu-Jitsu.

If you want to find a place where you can start in the art, Northwest Fighting Arts trains numerous students of Jiu-Jitsu in Portland, Oregon. Professor Jeff has experience bringing up fighters who have made careers in the UFC, as well as teachers who have opened martial arts schools of their own.