4 Reasons Why Martial Arts is a GREAT Family Activity 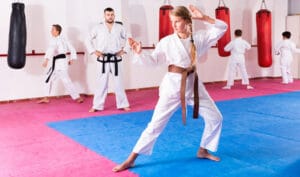 Martial Arts have been a mainstay of life for thousands of years in some countries. In fact, there are some reports of tai chi being used as far back as 2500 years! The benefits of practicing martial arts are varied, and many. Listed below are just a few.

In the US, more than 95% of adults DO NOT engage in some sort of physical activity for 30 minutes each day; only one out of three adults participate in the recommended amount of physical activity each week! Martial arts, in the form of Brazilian jiu jitsu (frequently shortened to bjj), tai chi or kickboxing to name a few, is a fun and beneficial way to get your exercise in, while learning a great skill. The average person can burn quite a few calories in a workout. Whether they decide to start with Brazilian jiu jitsu for beginners or kickboxing classes, most students love how much more energy they have after a few sessions.

The benefits of bjj as self defense

Martial arts have long been used as self defense. Most students are amazed at how confident they feel after they start learning Brazilian jiu jitsu basics or kickboxing, and that confidence and self-assuredness only grows the longer they train. Although we all hope it never happens, it’s nice to know that we can protect ourselves if put in danger.

Martial Arts as a health benefit

In a study of older adults, over half of the subjects who practiced tai chi felt more confident in their sense of balance, thus feeling more secure in going about their daily lives. The sense of well being, having the strength to do the daily activities younger people take for granted can be a great confidence builder for the older generation. Whether it’s gaining strength from an injury, recovering from surgery, or working on preventing injuries, some of the benefits of bjj are that it helps instill confidence that comes from physical stability.

In this electronic age, we all tend to spend to much time on our phones, ipads, computers, X-Boxes etc. With children, the days where they used to play all day outside, getting lots of fresh air and exercise seems to be forever in the past. In fact, two-thirds of parents worry that their child spends too much time on electronic devices. Enrolling your child in some kind of mixed program that includes Brazilian jiu jitsu and kickboxing can be a fun and beneficial way for kids to get exercise, meet new friends and learn how to defend themselves if harm comes their way. Martial arts, contrary to popular belief, does not teach kids how to be bullies. It does, in fact, teach kids (and adults) the confidence and self control to walk away from a confrontation without being physical and how to communicate in a non-violent way.

Martial Arts also teaches children respect for others and themselves. It helps them to have better grades in school, and in a lot of cases, how to be positive leaders and role models for others. The benefits of bjj to children are really endless!

In summary, so much for could be said for the benefits of martial arts: jiu jitsu, tai chi, kickboxing, and other forms. Martial arts can truly be a family affair! In fact, some statistics show that in the U.S. in 2016, approximately 6.9 million people aged six and above participated in kickboxing! Talk about a family sport!

The benefits of bjj are many; the cons, none. So what are you waiting for?