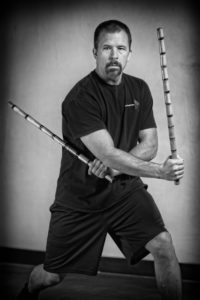 This marks the ninth and second to last post in our ten part series about Eskrima in famous films. The list of the top ten fight scenes using Filipino Martial Arts in Hollywood movies is already compiled here:  This article will focus on the clip listed at number two, the silver medalist, taken from the stomach churning film Death Grip.

Thus far we have examined a vast array of varying fight scenes, each showing different principles of Eskrima for self defense. There have been many examples of Eskrima stick technique being implemented with books, phones, bits of wood, and even a rolled up magazine. We have also learned how the right Eskrima knife techniques can fell multiple opponents in rapid succession, while the wrong choices can spell instant death. In addition to the obvious self defense applications there are also many reasons to use Eskrima for fitness. The kind of high-adrenaline training that goes into practising with weapons increases the rate at which an individual burns calories, helping a practitioner stay strong and fit. Engaging in such training will also increase a person’s threshold for stress considerably, as there are few things more frightening than facing down an armed attacker.

In the scene taken from Death Grip we see something new; two experienced Eskrimadors fighting a duel, one unarmed, the other with a pair of balisong, also commonly called a Butterfly Knife. The Balisong offers a multitude of angles of attack, as well as confusing and distracting patterns. The blade is usually short as seen in the clip above but still has space for a lacerating edge and killing point. While most of the principles of using Eskrima for self defense are ignored by both combatants in this clip, we do get to witness the bloody beauty of two well trained knifers dueling to the death. There is never any wasted movement in their economy of motion; each step and shift of the hips or shoulders is either a feint or a lethal attack.

Although one of the combatants begins without a blade, he quickly uses a disarming tactic to even the odds. This more than anything else in the scene captures the spirit of Eskrima, for once he gains a weapon the fight becomes much more equal. However there are also a multitude of metal and wooden objects strewn about the set which the unarmed man could have used to his advantage. In this case however we must thank the filmmakers for their choice, because if the fight had ended with a two by four to the skull, we would never have gotten to witness the majesty of two expert Eskrimadors fighting for their lives.